MLB Reaches out to Boston 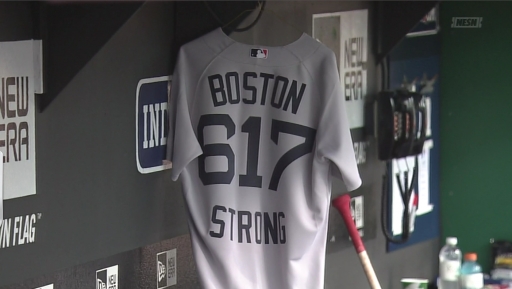 There are no words to adequately describe the pain and tragedy that occurred on Patriots Day in Boston.

The bombs that went off hurt hundreds of Bostonians and the pain of despair and loss stretched far out across the country. The tragedy shook the nation so much, in fact, that on Tuesday night, multiple ballparks across the country gave a tribute to the Boston Red Sox out of respect to those affected in Boston.

While “Sweet Caroline” has grown to be irksome to many Sox fans, many ballparks across the nation, including Yankee stadium, played the song during the game as is traditionally done in Boston. The iconic Neil Diamond tune rang through the park as Yankee fans showed their support to those hurting in Boston.

While the gesture may be seen as ironic any other day, this time it was a nod to the Sox to let the people of Boston know that they aren’t alone. In addition to playing the song, the Yankees had the image of a ribbon on the screen flashing the caption “New York stands with Boston.” Though bitter rivals to the end, it is amazing how the two teams can come together in such a time of crisis.

It truly was a heartfelt and touching moment; that two of the greatest rivals in the history of sports can come together in one moment that transcends sports is incredible. Despite business going along as usual across the American League, the sense of sadness couldn’t be shaken. Boston will survive, though, and will triumph over this. The Red Sox carried their own message to Cleveland, letting the world know we are “Boston Strong.” While the dust has yet to settle after the tragedy in Boston, MLB is doing its part to help a state of normalcy resume as the people try to pick themselves up and keep moving on.

In the meantime, several Sox players have reached out to their home city via Twitter and similar social media sites. Will Middlebrooks has been especially active on Twitter as he continues to show his support and boost morale back home.