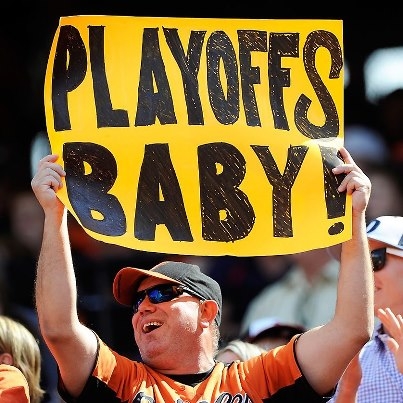 Fall is finally here, and this time, it's bringing some new faces with it.

The leaves have begun to change colors. Shorts and T-shirts have given way to sweatpants and hoodies in many parts of the continent.

More importantly, the MLB post-season is gonna see some changes, too.

And those will leave out a good number of these dudes:

Things in the National League seemed to be pretty well locked up at this point.

The Mets and Dodgers, while not yet clinched, are all but guaranteed to win their respective divisions.

The league-leading Cardinals have already clinched a playoff spot, though their NL Central title charge is being threatened by the Wild Card-leading Pirates, who punched their playoff ticket Wednesday. Bringing up the playoff rear is the Cubbies, who have a solid ten-game lead on the Giants for the second Wild Card spot.

Maybe Back to the Future Part II was on to something. In 1989. Freaky.

The American League scenario, however, is much more complicated.

Besides the Central, where Royals became first team to clinch a division, the races in the East and West are still open.

The Blue Jays have continued their trade-deadline infused hot streak. Canada's team has picked up 11½ games vis-à-vis the Yankees since the deadline. The Bronx Bombers may only be three games back, but they face an uphill battle to reclaim the AL East, where they were in the driver’s seat for a majority of theseason.

In the West, those surging Rangers have built a lead that seems larger than three games, as the Astros continue to fall on their face. Maybe their youth and inexperience is catching up to them under the late-season pressure. The Los Angeles Trouts Angels -- well, it should be Trouts -- are lying in the weeds, but they'll require serious help from anyone playing Houston or Texas if they expect to reel in the division.

The Wild Card is where things get interesting.

The Yanks have a four-game advantage over the 'Stros for the first Wild Card spot. The Angels and Twins are right on the right on Houston's heels, as both are only a game-and-a-half behind.

While not out of it, the Orioles and Indians have an outside shot of crashing the party. If it takes a miracle to get either of these two teams in -- and it will -- is there anybody else besides Buck Showalter and Terry Francona you'd rather have at the helm?

It’s sad to see summer go, but playoff baseball makes the cold weather worth it.

Unless you're a Nationals fan.