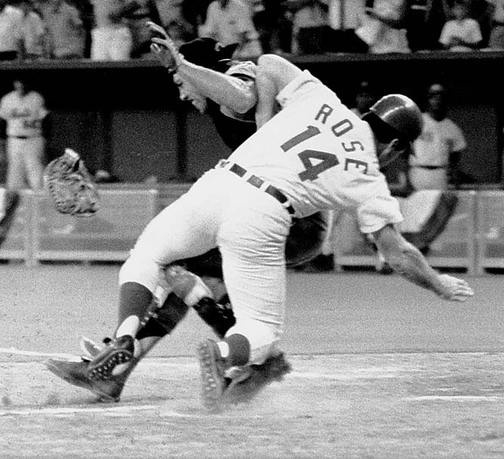 The home plate collision is apparently nearing extinction, as MLB will look to impose a ban on the traditional baseball play by 2015 at the latest.

On the surface, this makes complete sense. From a strictly player-safety perspective, it's hard to believe these steps weren't taken much sooner. It appears that MLB would just as soon avoid the endless litigation the NFL has experienced with concussion-related issues. And who can blame them for wanting to protect their brand and interests?

However, purists would argue that eliminating this play is tantamount to sacrilege and a violation of everything that is good and decent in our society.

''What are they going to do next, you can't break up a double play?'' Rose asked in a telephone interview with The Associated Press. ''You're not allowed to pitch inside. The hitters wear more armor than the Humvees in Afghanistan. Now you're not allowed to be safe at home plate? What's the game coming to? Evidently the guys making all these rules never played the game of baseball.''

Charlie Hustle is blunt, but he makes a valid point.

Arguably, his signature play occurred in the 1970 All-Star game, when for all intents and purposes, he ended Ray Fosse's career. It remains an effective promotional vehicle for MLB and its media partners:

The examples of hard-nosed play that Rose cites and personnifies and are built into the fabric and tradition of the game. Imagine for a moment players not being allowed to slide hard into second, or a pitcher being forbidden to dust an opposing batter with an inside pitch.

This may be paranoid speculation, or it could be the first steps toward softening the game to the point where it is rendered unrecognizable.

The NFL, in an understandable effort to curtail violence on the field and protect the shield, is risking the alienation of a loyal fan base by taking penalties and disciplinary action to the extreme. This is unfair to both the players and the fans, and MLB may be headed down the same slippery slope.

We certainly know where Pete stands on the issue.