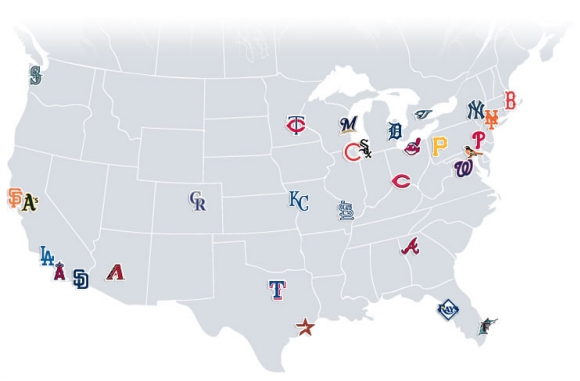 The the trial involving the City of San José vs Major League Baseball on their right to move the Oakland Athletics is definitely off to a convoluted start.

It got me thinking about baseball's current geography and divisional alignment as to what other North American cities could support a franchise.

With San José being the tenth-largest city in the United States, one would think it could easily host a team, especially with all that money floating around Silicon Valley like a Charlie Hough knuckleball. Support for the other professional sports in San José is a mixed bag, with the Sharks ranking 16th in the NHL and the MSL Earthquakes ranking second-to-last this season.

The Bay Area is certainly large enough for two teams. However, it appears the A’s have run their course in Oakland. The stadium is decrepit, the Raiders complain about having to play on the dirt infield, raw sewage has spilled into an opponent’s locker room, and you can end up lost in Too $hort’s old neighborhood with one wrong turn.

Geographically, the western United States are muchmore vast than their East Coast counterparts, making travel skewed for the likes of the Seattle Mariners, who log MLB's most frequent flyer miles every season; Oakland is the closest team to them at 802 miles away. If it weren’t for the Kansas City Royals, the Colorado Rockies would be competing with the Mariners for the race to reach 10,000 Alaska Air miles points!

Baseball is a popular enough sport to expand the current field from 30 to 32 teams. It doesn't need to follow the NBA's lead and go into smaller markets, as there are several large cities that do not have a major league baseball franchise, such as Charlotte and Nashville, to name only two.

Based upon the latest Census Bureau data, San Antonio, ranks seventh in population, yet only the Spurs call it home. Of course, if we used population as our only criteria, Jacksonville -- ranked No 13 -- should host a professional sports franchise, and yes, that was another shot at the Jaguars!

One city that ranks high in population, Indianapolis, would be a good place for either expansion or relocation of the Tampa Rays, who rank dead last in MLB in attendance, despite making the post-season as a wild card team.  Tampa Bay couldn’t even sell out a home playoff game. You should immediately get your charter revoked! It's only saving baseball grace is its game telecasts get strong ratings. Still, Tampa Bay appears to be a hockey town. Wow, never thought I’d say that!

Indianapolis hosted a professional baseball team in the failed Federal League in 1914, led by star OF Benny Kauff and Hall of Famer Edd Roush. They actually won a league title, which is the equivalent of Ralph Nader appearing on the Presidential ballot in 2008. The Federal League was a dark time in organized baseball and only lasted two seasons. It’s time to bring the Hoosiers back with Gene Hackman as manager!

Portland, Oregon should also be up for consideration to receive an expansion franchise, as they would offer a natural rival for the Mariners and rank 28tn population. They'd need to build a retractable-roof stadium to be viable in the soggy Northwest. It took the Mariners 23 seasons to get rid of their awful domed stadium, and we actually had a viewing party when they blew up the Kingdome in March 2000! Baseball is meant to be played outdoors on real grass, but Portland would probably lead the league in rainouts. Not a good start for an expansion team.

Really, the city that deserves to get a team back is Montréal. The disgraceful handling of that franchise in 2004 truly left a bad taste in all baseball fans' mouths, as they were forced to play a portion of their home games in Puerto Rico. The Expos finally moved to Washington DC the following season, and while the Nationals have had some success recently, the 'Spos used to pack the house themselves before local politicians and Bud Selig's boys dealt them a one-two punch of adversity that sealed their doom.

Both baseball strikes in 1981 and 1994 ruined what were promising seasons for the Expos. Attendance dwindled dramatically after the last players strike. Placing another team in Canada would give MLB more global exposure, which is a top priority and would probably draw better than in a Latin American country, or Puerto Rico, for that matter. If not Montréal, Vancouver is a hot market, and MLB still drops hints now and then about taking a long look at Mexico City.

Once the Oakland Athletics situation is settled, MLB can focus on expansion and realigning divisions, and ultimately expanding the playoffs. Until then, to the people of St Petersburg, Clearwater, and environs, the next time your team is in the playoffs, try to show up!