MLB 3.16: How to Deal with Besotten Sons 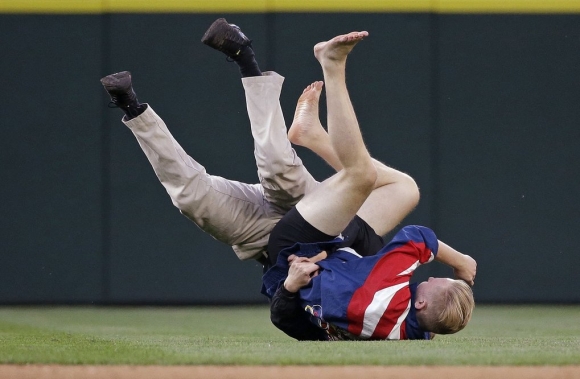 The St Louis Cardinals were having a tough enough time in Seattle against the Mariners on Sat 25 Jun.

So, the last thing they needed was to play against an extra defender.

But that's what happened.

Matt Carpenter was up in the fifth inning with runners at first and second:

If anybody didn't know there was a beer garden behind the fence in left-center, they do now.

And beer does wonders for a body attempting to descend form a ten-foot wall.

Dude was summarily cuffed and carted off after a tackle that Seahawks coach Pete Carroll would admire.

Baserunner Tommy Pham has wheels, so there's no doubt his advancement to third was a given, what with left fielder Smith moving in the opposite direction.

But what would've happened if that fan's dash was a few seconds later?

This rules out any other eventuality if Smith had dropped the ball. The St Louis-Seattle three-game series did feature a few of those.

To be sure, Aledmys Díaz followed Carpenter and drove in those baserunners with a blast to left-center. So they scored anyway.

Ironically, if the drunk dude would've stayed in the beer garden, he might've gotten a souvenir instead of a mug shot.

Those are the sorts of priorities that got him arrested in the first place.