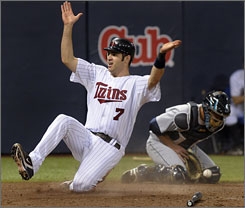 Even though baseball pennant races and wildcard spots up for grabs all over the place, I'm venturing out of the races for Monday's selection.

But do you care?

If it's a winner, you're happy either way, right? So let's head down to Texas where the Minnesota Twins visit the Astros at Minute Maid Park. Bovada has the Twins listed as only a slight favorite at -110, and I'd be willing to lay quite a bit more than that on them.

Minnesota sends recent new addition lefty Tommy Milone (6-3, 3.55 ERA) to the mound to make his first start with the Twinkies after his recent trade from Oakland. While he didn't put up Sonny Gray or Scott Kazmir numbers, Milone was still very steady in Oakland, as the 'Stros discovered in their own yard earlier in the season.

The A's simply realized Milone was expendable because they already had Gray, Kasmir, and new trade acquistions Jeff Samardzija, Jon Lester, and Jason Hammell. So they used his value to try and bolster their roster by adding outfielder Sam Fuld in exchange for dealing away Milone.

So don't be mistaken by the A's trading away Milone. It was because they could afford to deal away a really good pitcher rather than badly wanting to get rid of him; Milone's asking for a trade thus made both parties happy. He's a great addition to any staff and will show why starting tonight.

For example, Milone walks an average of one batter for every 20 he faces. And against the weakest-hitting team in the American League, he should certainly give them a great chance to win.

Keeping in mind Milone's steady numbers, notice all the factors pointing the way of a Minnesota win as you take a look at the Smart Chart, which is found by using the Bovada data tool on our Home page. Notice the Twins have the edge in all but two statistical categories. Couple that with Milone's numbers, and that alone is almost worth taking the Twins at -110.

I haven't touched on Houston hurler Brad Peacock, who has been less than impressive this season, and that's especially true recently. Peacock (3-8, 5.44 ERA) has surrendered 15 earned runs in his last 8⅔ innings of work; not the kind of numbers that should excite anyone backing Houston tonight. In fact, I couldn't imagine backing the Astros based on Peacock's recent outings and everything else stated above. And I certainly couldn't endorse them at even money.

Milone should be very well rested, having not started in a major league game in over a month. He did pitch for the Twins' AAA affiliate last week and was very impressive in his seven innings of work.

There's some chatter about Minnesota getting a boost from the return of first baseman Joe Mauer from the disabled list, but based on his lack of production this season, I'm not factoring that into the equation. However, this is still a case of a very good pitcher facing a very poor hitting club that has nowhere near the pitching to keep up. That makes this a no-brainer.