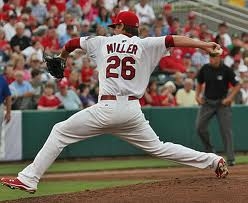 The St Louis Cardinals could be in unfamiliar territory Sunday as they prepare to face the Atlanta Braves. An Atlanta win means a Braves sweep, and the Cardinals haven't been swept on the road all season long. It's also been more than a decade since the Redbirds have been winless in a series on the road against the Braves. A Sunday loss would also be a third straight for St Louis, and they've only had a pair of losing streaks that long all season.

But all of those consequences will be a moot point if the better pitcher prevails today, and that would be the Cardinals' Shelby Miller. Miller looks to improve his 10-6 record and 2.77 ERA while opposing Kris Medlen (6-10, 3.78 ERA). Miller's overall body of work has been much better than Medlen's for the season, but lately, it's been even more noticeable. Medlen has failed to make it through six innings in his last three starts, and his ERA is over 8.5 during that span. He also has one career start against St Louis, and that came last year in the playoffs, where he lasted 6.2 innings and yielded two earned runs in a Cardinal win, 6-3.

Today's match-up with the Braves will be the first for Miller, and that already should spell advantage Cardinals. It could take Braves hitters a trip or two through the lineup to start to get a feel for the right hander's stuff. And that's something few teams have done who are used to facing him.

You will see by using the Bovada data tool on our Home page that Miller has won all three of his last three starts and has picked up quality starts in two of them. That includes his last outing, where he pitched six shutout innings in a 4-1 Cardinal win last Tuesday.

Cardinal bats have been silent as of late, meaning it's only a matter of time before they start to warm up again. After all, they are the National League's best offensive team, and this might be the best time for them to have a resurgence, considering Medlen's recent struggles. The value here also looks good, considering that Bovada only has the Cardinals at -117, therefore, l will be backing the Birds to get back on track.