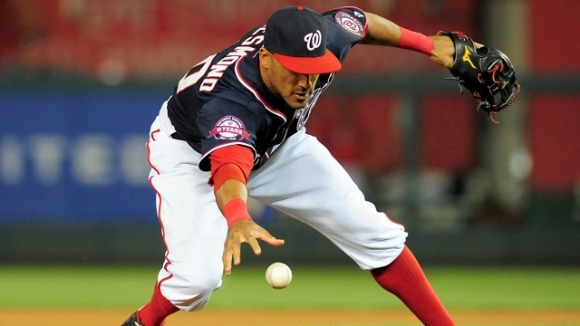 The Senior Circuit has provided some forgettable baseball during 2015's first half, with four of the top five Snark Rankings teams coming out of the National League.

One of the best players in baseball, Giancarlo Stanton, is out for at least another month, which makes south Florida completely irrelevant when it comes to baseball.

The NL East leaders must be licking their chops with Stanton out of the lineup. Perfect opportunity to pad their win column until he returns to action.

For the Marlin slugger, at least a broken hand beats a broken face. 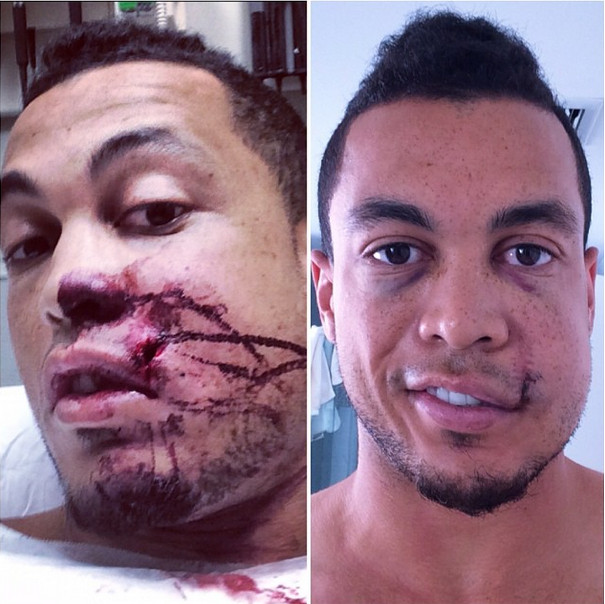 Unlike the AL All-Snark team, the NL squad finds players from contending teams, which proves the old baseball proverb: pitching and defense win championships. Are you listening, Ian Desmond?

Please understand why there is no DH on the NL team, just like how you weren't allowed to vote for a NL DH on All-Star ballots. Someday, the leagues will unify as one voice and play under the same rules. Keep holding your breath only if your medical insurance is current.

Norris was acquired from the A's in the off season to help the Padres reach the playoffs. Instead, things have gone horribly wrong and Bud Black was fired. Because, you know, it's the manager's fault that All-Star players are hitting in the .230s.

A lost season in Northern Tijuana might have Los Fathers selling off useful pieces at the trade deadline.There are a lot of teams that can use a solid catcher. Don't think the Padres won't flip any of their recently acquired assets. In fact, that's so odds-on that Bovada won't touch it. Good investors know when to cut losses and maximize profits. So, even if Norris does have one of the grungiest beards in the majors, he could still be coveted. Mattingly must be jealous.

Did anyone else notice Norris' BB/K ratio is a perfect mirror image? If he ever looked in a mirror, he'd sign up for Dollar Shave Club immediately. Mention my name, and I'll get a $5 credit towards my next order!

This is a relationship that should've ended years ago, but neither one has the guts to tell the other straight to their face.

Well, that and the fact his contract is unmovable. Who would've offered such a payroll-toxic deal?

Celebrities nowadays get married or divorced just for the PR when they've been out of the news cycle for an extended period of time, which in today's rapid information deployment means by lunchtime.

The Phils and Howard aren't so lucky.

Dude has the exact same number of homers as walks, which explains the .270 OBP. There's surely a contender out there who wants to forge a meaningful relationship with the big slugger; they just don't know it yet.

Will GM Ruben Amaro Jr be the one to make that call, or is he, too, headed for divorce court?

Can Chase Utley and Howard be packaged together? That'd be a huge weight off the shoulders of Phillies fans. But it'd only happen if no one drug-tests the GMs who'd take them.

Hey! I think we've found a landing spot for Chase Utley! Arizona needs a 2B, and they have a deep farm system.

Owings is clearly not the table-setter for slugger Paul Goldschmidt with that pathetic OBP. An OPS of .570 is the second-lowest in the NL; only the Reds' Billy Hamilton (!) is worse. No doubt Cincinnati wishes they had the real Billy Hamilton. Unfortunately, maybe they do.

The Snakes have a long haul to catch up to the Dodgers and Giants, so expect some retooling and several more years before they're back in the post-season.

Take solace, desert dwellers, in the fact that your Franchise Four were responsible for your only World Series championship in just your fourth year of existence. Some teams haven't experienced October baseball since then, much less a World Series title. Ramírez was a strong candidate to fill out a change-of-address postcard, and it came to pass.

Welcome to the 'Burgh, dude. Again.

Milwaukee checked in at No 2 on the Snark Rankings update last week, and if a team ever needed some new blood, it's the Brew Crew. Their fans' favorite time of the season must be September, when the call-ups arrive, just so they can see who'll disappoint them in the next campaign.

The National League's shortstop position was one of the most competitive spots in assembling any Snark team ever. Jimmy Rollins, Wilmer Flores, Jean Segura, Starlin Castro, and Andrelton Simmons all presented very strong cases, but Desmond's .211 BA and 99 Ks put him over the top.

Desmond is one of those players that just has to show up and let the überstars around him take over the game.

Bryce Harper and Max Scherzer got you covered, Ian. Try not to screw it up over and above what you already do.

Hmmm. I see a pattern here, and it's coming straight out of the Midwest. The NL Central has a wealth of the most exciting players in the game with Andrew McCutchen, Kris Bryant, Michael Wacha, and Gerrit Cole, just to name a few.

No wonder the Buccos keep trotting Polanco out there. Much like Ian Desmond, just show up and try not to do anything stupid. Is that in his job description?

At least we know who the leadoff hitter will be on this squad. Hamilton does have blazing speed, but at some point you have to get on base by any means necessary. As the Dodgers told Maury Wills -- who re-introduced swiping bags to modern-day offenses -- back in the day, "You can't steal first base."

Hamilton should set his sights on the major league record for bunt singles in a season.

The Reds should do what the Cardinals did with super-speedster Bake McBride in the 1970s: give him the smallest bat out there and force him to chop down.

Cincinnati should do something other than what's happening now. If they keep this up, Bryan Price will be the next man up in the firing line.

Because at this point, not even the Old School Billy Hamilton could save them. Even if he was alive.

Shocking that a Rockies SP gets the nod for the NL.  Humidor or not -- and the AAA Pacific Coast League bought into it two years ago -- these dudes just flat-out struggle at Coors Field keeping balls from flying out of the yard. In any year.

In the age of corporate naming rights, shouldn't they change the name to Coors/Miller Field?

Kendrick leads the league in gopher balls surrendered by hanging sliders left out over the plate. I'm sure that's where the catcher wanted the location.

Whatever the Rockies can do to acquire quality starting pitching must be a top priority by now, and who was the genius that thought re-cycling a Phillies chucker not named Hamels would fit that category?

Hey! Seattle has some good young SPs and need hitting badly. How badly? Like a crack fiend down to his last rock.

If Jack Z is truly trying to save his job, he'd do this deal in a heartbeat! Mariners fans might actually be excited about baseball for the next two months until the 12's take over Pioneer Square. Cishek's season derailed so fast he was sent down -- or is that up -- to AA Jacksonville of the Southern League.

Pretty astounding to find a reliever that far down the rung who saved 39 games last year and posted two superb seasons before that out of the pen.

Just as astounding that the pitching-rich St Louis saw something in Cishek to trade a decent prospect for him. Could be why they're the small-market/big-results Cardinals and Miami is Jeffrey Loria's Marlins.

This explains a lot about Miami's season. What with Cishek, Mat Latos, Dee Gordon dislocating his thumb, Mike Redmond getting replaced by the GM, and Giancarlo Stanton, it can't get much worse. Can it?

Of course it can! And we'll be there to cover it.