Meet the New Drew; Same As The Old Drew 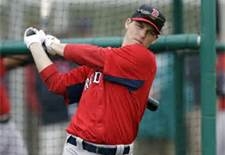 When the Red Sox signed Stephen Drew to a one-year deal to play shortstop there seemed to be more groans of frustration than cheers of joy. Now I see why.

J D Drew did little to endear himself to the Fenway faithful. He played five years and put up good numbers but spent more time on the DL than he did hustling it out on the field. His antics and constant complaining earned him the nickname “Nancy Drew;” whether he deserved it is another story.

Stephen came to Boston with a chip on his shoulder. He tried to distance himself from his dear old big brother by proving he’s a bit tougher and more vocal when it comes to showing passion on the field. Fast-forward a few months, and now Drew has landed himself on the DL and will miss Opening Day.

It started off simply enough, a pitch nailed Drew on the helmet, but he shrugged it off as nothing. In fact, he played the rest of the game and said he felt fine.

“That? It was nothing,” Drew commented that day as he left the park.

After the game, though, he started to get a headache that was quickly diagnosed as a concussion. A week passed, and it became obvious that Drew would not bounce back as quickly as manager John Farrell had originally hoped.

With Drew out for what could very well be forever, the Sox now need someone to play shortstop for the start of the season. There are a few good choices:

Iglesias is the better choice, given his excellent fielding capabilities and the fact that his relatively quiet bat has woken up of late in Spring Training. He's also been hitting the ball with a newfound authority, proving that he has a bit more pop in his swing and deserves a spot on the major league roster. Farrell has been working closely with Iglesias to help him find a swing that actually works this time around, and the two seem to be making progress.

"He’s done a good job. We talked about his set-up in the box in the early part of camp. We’ve seen more consistent hard contact. He can’t be totally measured in the batting average but he’s looked aggressive at the plate," Farrell said.

If Drew hopes to make a quick return, he’ll have to be cleared by MLB and its extremely strict approach to concussion recovery. Ryan Sweeney had a similar experience, suffering from a concussion after making a diving catch against the Phillies in 2012.

"They're pretty tough," Sweeney said of the tests at the time. "One's like a written one, which somebody reads to you. It's basically just like memorization, reaction times. There's a computer test that's reaction times, remembering words, shapes, colors, it's the whole nine yards.”

Maybe Drew’s trip to the DL will be a short one and doesn't become a habit during his brief stay in Boston. However, given the genetic fragility of the Drew family, that could be wishful thinking.