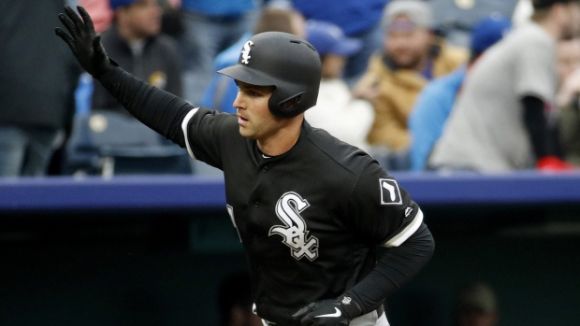 Matt Davidson isn't really a household name, with the possible exception of his own household.

However, they've become intimately familar with his work in Kansas City.

The Chicago White Sox slugger has somehow managed to hit seven home runs against the Royals at Kauffman Stadium so far this season.

While this does seem ludicrous, these numbers do check out.

The 27-year-old has nine homers this year, including the aforementioned seven in KC, which just happens to be a record for an opponent at this particular baseball edifice.

Please keep in mind, it's not even May yet.

Perhaps Royals skipper Ned Yost could unleash his horde of killer bees on this lunatic, because conventional means are not getting the job done.

The White Sox opened the season in KC, where Davidson marked the occasion with a hat trick.

The Sox just returned to KC this week, and dude ran amok yet again, poking two outta the yard on Thursday.

And then two more the next day, including the game winner in extras.

Davidson seems to be blessed with the clutch gene, as least in the cozy confines of Kauffman Stadium.

However, the MLB schedule selfishly requires teams to play in other venues, including their mandated home park.

We'll see how Davidson fares back in Chicago.