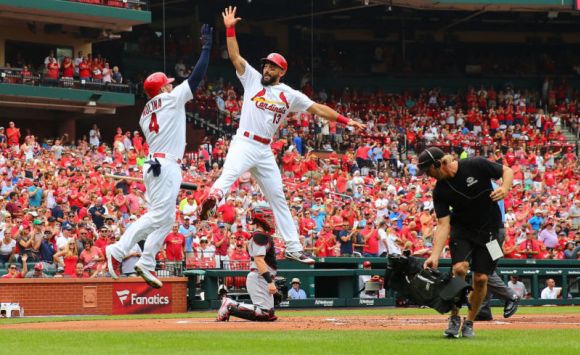 Matt Carpenter has always been a perfectly solid ballplayer.

However, the dude is having an out of body experience this season, having blown right past his career high in homers in the middle of August with 33 while sporting an OPS that is currently almost 100 points higher than his previous best.

So you'll understand the hand-wringing in St Louis after Carpenter was smacked on the back of his right hand by a pitch from the Nationals Matt Grace.

But fear not, alleged best fans in baseball.

That gritty bastard was right back in the lineup the very next night.

Carpenter was able to pass a battery of strength tests, including the most important one of all which involved the opening of a jar of salsa.

But this isn't just any salsa, folks.

The Redbird slugger had been encouraged to become a suburban gardener by teammate Adam Wainwright.

While remaining in town while the Cardinals were on the road -- he was on the DL, rehabbing -- he literally sneaked into Carpenter's back yard and did the planting himself.

There's your confirmation from the instigator that this was Carpenter's very own homemade salsa grown in his very own garden, an item he brought with him on a road trip back in July.

It just so happens that dude went completely nuts on that road trip, binging homers in Chicago like someone battling an eating disorder.

Carpenter has placed himself squarely in the MVP conversation by doing stuff like this:

Wonder what else he grows in that garden of his.