Matt Cain Contract: Money for Nothing, Checks for Free 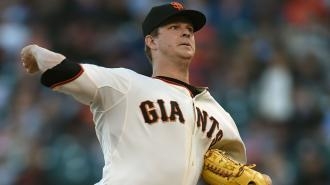 Has Matt Cain's contract extension been more of a bust than a boom for the Giants?

Yes, Giant Nations thanks the baseball gods for all those high caliber fill-in starts delivered by rookie Chris Heston.

Such sentiment --certainly understandable, and even laudable-- delivers scant relief to a Giants' pitching staff held together by good vibes, aging veterans hanging on, Bochy-isms, over-performing unknowns, and big helpings of Pasta Righetti served in the Giants' mess hall.

Sometimes, though, all the combinations and machinations just don't pan out. Here's manager Bruch Bochy commenting after a tough late-inning loss to Atlanta in late May: