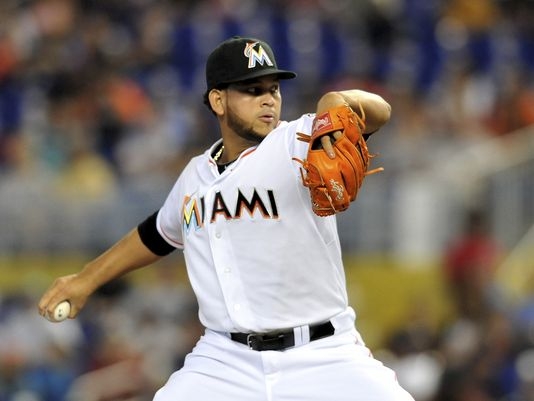 Henderson Alvarez did something today that no other pitcher in the history of baseball has ever done.

He was in the on-deck circle in the bottom of the ninth inning, waiting to hit, when Detroit reliever Luke Putkonen uncorked his second wild pitch of the inning.

That sent Giancarlo Stanton prancing home with the game's only run.

On the last day of the 2013 season in a professional organization that's been around since 1875, the woebegone Miami Marlins needed a couple of singles from their power hitters and a couple spikes from the opposition's reliever to award their starter what he so richly deserved. Alvarez thus became the fifth Marlin to throw a no-no.

The only blotch on the box score was an error by shortstop Adeiny Hechavarria, who kicked a routine grounder and couldn't recover in time to get the speedy José Iglesias in the fifth. The only other Tiger to reach base was Andy Dirks, who walked in teh ninth.

The Marlin right-hander needed no sparkling gems on defense from his teammates. All he needed was a run. Given the Marlins' season, that was asking a lot.

Detroit ace Justin Verlander mowed down all but three Miami batters through his six-inning tune-up for the playoffs, striking out ten in the process. Tiger relievers were just as stingy, until the fateful bottom of the ninth.

Masher Giancarlo Stanton took two Ruthian attempts to end the game in one swing but steadied his form sufficiently to line a leadoff single. Fellow pounder Logan Morrison shot another single up the middle. A Putkonen breaker then skipped in front of the plate, not far from catcher Brayan Peña, but an alert Stanton -- mindful of the downcount -- took an extra step on his secondary and was in prime position to dash for third.

After Hechavarria was unable to atone for his boot and bounced out, former Rookie of the Year coaxed a walk. That brought veteran Greg Dobbs to the dish, and Alvarez dutifully stepped into the on-deck circle. After all, he'd only thrown 99 pitches -- 66 for strikes -- and manager Mike Redmond wasn't about to pull him. If Alvarez had to work a tenth in hopes of achieving what would be the highlight of his career, then work it he would.

But watch was all he had to do.

For the record, MLB only recognizes no-hitters that occur "during the entire course of a game, which consists of at least nine innings." Ask former Pirate Harvey Haddix about that. He tossed 12 innings of perfect baseball against the Milwaukee Braves in 1959 and lost in the 13th, 1-0.

Alvarez was spared any such agony. Enduring Miami's 62-100 campaign was enough.