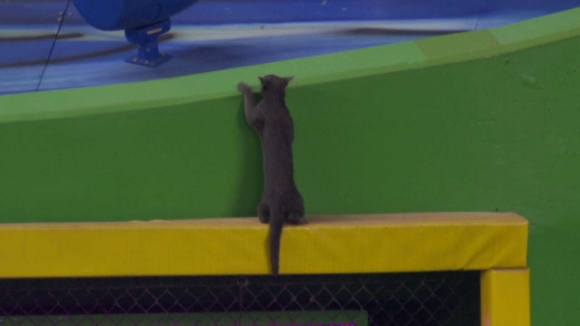 It's no secret that animals sometimes like to get involved in sporting events.

These critters occasionally appear in human form, or they can be literal animals.

This young baseball season has already seen such an occurrence.

During the Marlins 8-4 win over the Atlanta Braves in their home opener, a random cat decided to get involved.

While the cat wasn't able to demonstrate any baseball aptitude, it did display some impressive athleticism, eventually eluding the grasp of both Giancarlo Stanton and a concerned groundskeeper.

However, the real fun began when the cat began scaling the outfield fence.

Unfortunately, this rogue feline was forced to climb up on that hideous home run monstrosity in the outfield.

What a tacky assault on the senses.

We'll give the cat a pass on this one, as it was only using the sculpture as a means of escape.

Also, it's worth noting that this frisky feline appeared to be gray and not the traditionally unlucky black.