Published on 3-May-2018 by Alan Adamsson 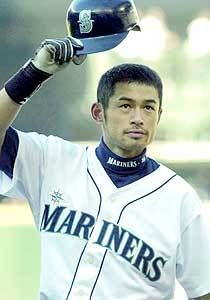 Damn. One more platitude, and this could pass for a funeral.

Ichiro Suzuki doesn't see it that way, though.

Maybe the Seattle Mariners think it's time for MLB's oldest samurai to fall on his bat -- and maybe they're right -- but dude hasn't accepted it yet.

Officially, all that's happened is he's been removed from the club's 25-man roster, which means he's done for the season as a Mariner player.

Maybe Ichiro does wind up on someone else's roster next season.

Maybe it'll be in Japan with Orix -- formerly the Blue Wave when he was there but now the Buffaloes -- which would be fitting.

That's a style that no youth coach is gonna teach, just like the corkscrew approach that put Stan Musial in the Hall of Fame. But both those dudes got their hips through first to get max torque outta their swings.

And like Stan the Man, Ichiro has carried his mechanics into his 40s, but it's beyond clear time has eroded his edge, like it does to all mortals.

In his prime, which is when he came to Seattle from Orix, Ichiro did it all:

He'd racked up enough accomplishments by mid-2016 to warrant a compilation video without his career even being over:

The 3000th hit came later that year, of course, in typical Ichiro fashion.

He and Paul Molitor are the only ones to mark the occasion with a triple.

One of his most dynamic moments was in the 2007 All-Star game.

That's when he hit the only inside-the-parker in Midsummer Classic history:

Come to think of it, if anyone deserves a mega-heap of platitude, Ichiro's the one.

And if he indeed leaves MLB, his distinctive setup in the batters box will no doubt be his lasting impression.