Mariners Include Stirrups in Their Sunday Retro Look 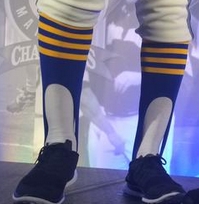 Alternate uniform rollouts aren't really headline news, but they can raise some eyebrows.

In this case, it's about the accessorizing.

The Seattle Mariners just introduced their Sunday kit for the 2015 season. It's nothing remarkable -- except maybe for diehards who reminisce about an era when their lousy team played in a lousier stadium -- but it's notable that the team made a conscious effort to offer stirrups as a standard option: Upon closer scrutiny, they're going with actual stirrups instead of the fake two-color socks:

Believe it or not, baseball has never had a hard and fast rule regarding pant length. Back in the pro game's infancy, breeches became favored as a safety measure. And so it stayed until 1979, when Cleveland's George Hendrick went against the grain and lowered the look. It was a radical departure from what was that era's Zeitgeist, when stirrups weren't much more than a few exposed threads:

It seems these things fluctuate on a generational basis. There's been a surge in youth teams returning to stirrups in the past few years, and it's now moved up to the college level, where they're a common sight. While a handful of MLB players have reverted to the look over the past decade, it looks like some teams are now taking them into account.

Remember, there's a distinction between alternate uniforms and throwbacks. The latter may include stirrups as standard issue, but the former has no need to do so, unless player demand presents itself.

The Mariners have no doubt put a tear in the eye of purists everywere. Now, about those damn pitch clocks ...