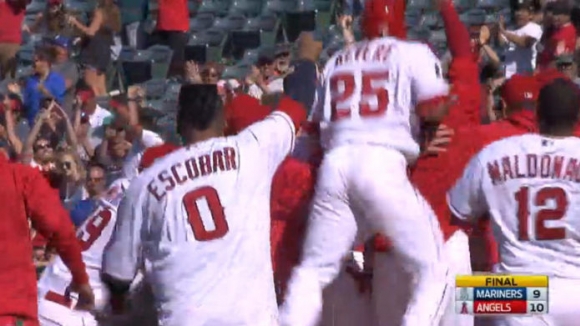 There are precious few sure things in this life.

From a baseball perspective, holding a 6-run lead in the ninth inning would be pretty close.

However, sometimes the narrative becomes twisted and gnarled, leaving only a withered stump of a baseball team.

Tragically, this is what went down on Sunday between the Seattle Mariners and Angels in Los Angeles.

The Angels scored seven runs in the bottom of ninth to inexplicably win a baseball game they had absolutely no business winning.

How does such a thing happen?

Obviously, many things have gotta go wrong to allow a debacle of this magnitude to occur.

Albert Pujols certainly enjoyed himself, as he homered to lead off the ninth and then tied the game up later with a two-run single.

The nightmare finally came to a close for the Mariners when someone named Cliff Pennington drove in the game-winner for a 10-9 win.

Seattle missed out on a playoff berth by one game last season. Odds are it was a game like this. They can only hope against déjà vu in 2017, but if it's gonna happen, it'll happen to them.

The MLB season is really long, so there will be oddities along the way.

There have been worse ninth-inning meltdowns, though:

That was nine runs in the bottom of the ninth.