Mannyland Moves to Taiwan; Ramirez Guarantees Team Will Finish No Worse Than Fourth 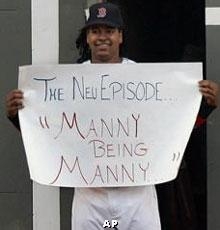 Ramirez has reached a verbal agreement to play with the EDA Rhinos of the China Professional League.  The 40-year-old left fielder is currently a free agent and has a Thu 7 March deadline to make a decision. By that, I mean he has until Thu 7 March to have an MLB team pick him up.  Thus far, Manny has no takers.

Ramirez last appeared in an MLB game in 2011, playing in just 5 games for the Tampa Bay Rays.  His last full season was split between the Los Angeles Dodgers and the Chicago White Sox, to whom the Dodgers traded him near the end of the 2010 season.

Ramirez was abysmal playing for the Tampa Bay Rays.  Appearing in just 5 games, he went 1-for-17 with a lone RBI and four strikeouts.  In 2010, Manny appeared in 90 games, posting a .298 batting average while collecting 9 home runs and 42 RBI. Ramirez spent the first 50 games of 2012 serving a suspension for a second positive PED test.

Signing a minor league contract with the Oakland A’s in the off-season, Ramirez appeared in 17 games for their Triple-A club in Sacramento.  When the A’s didn't summon him to the big leagues, Manny asked for and was granted his release.  He spent this off season playing winter ball in his native country of the Dominican Republic.

On a related note, one Taiwanese translator is currently asking anyone how you say “Manny being Manny” in Mandarin.