Manny Machado and the Red Sox Get Chippy 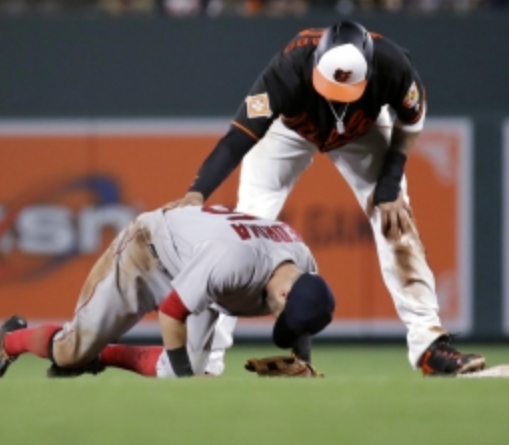 We aren't even out of April yet, but things are already getting weird in MLB.

Typically, it doesn't take much to stir the pot, a fact the Boston Red Sox and Baltimore Orioles confirmed this past weekend.

In fact, just one hard slide can kick off the hostilities.

The young Baltimore infielder took out Dustin Pedroia with a pretty hard slide at second base on Friday.

Well, he did cleat him, but that looked fairly clean overall.

But wouldn't you know it? Boston seems to have taken exception to the slide, particularly as Pedroia was injured on the play.

Which brings us to Sunday.

You knew it was coming, and sure enough, Red Sox reliever Matt Barnes adhered to the ritual and threw at Machado.

Well, more accurately, he hit him in the head with a baseball.

There's a lot to unpack in that video, including the caveman mentality being advanced by the announcer.

He literally said payback four times in the clip.

It's also worth mentioning that Pedroia certainly wasn't advocating for the head shot.

MLB has suspended Barnes for four games and fined him an undisclosed amount.

Now, we simply wait until these two teams hook up again.