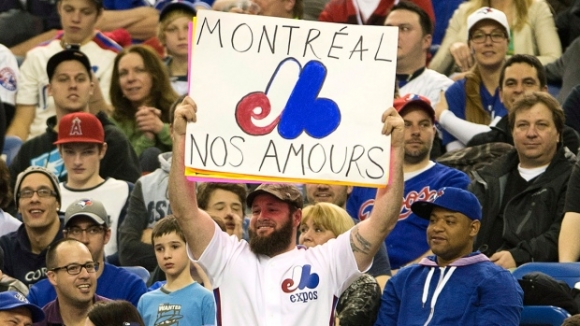 Do you know where you team’s stars are?

If they’re lucky -- you know, contract bonuses -- they're at this year’s All-Star Game in Miami.

Of course, the players aren’t the only ones who gathered in Miami.

Among the dozens of jacked up dudes in South Beach for baseball's greatest exhibition event is league commish Rob Manfred.

During MLB’s Fan Fest event to commence festivities, Manfred dropped a few enticing lines about potential cosmetic changes to The Show in the near future.

The biggie, though, was his mention of expansion.

Damn. Those dudes are everywhere.

And no one expected talk of adding more teams to be mentioned in Miami, either.

Montréal has been pushing for a new team ever since 2005 when the Expos left Canada to become the Washington Nationals.

According the a report from last year, there are a number of investors lined up, waiting for MLB to give the go ahead for a new Expos v2.0.

Charlotte and Mexico City have been tossed out there every now and then as possible locations for league expansion.

Charlotte already houses a couple of major franchises in the Panthers and Hornets, and Manfred's been touting Mexico City since the World Baseball Classic.

The last expansion happened in 1998:

Dropping a subtle hint, Manfred commented about the stadium situations facing the Oakland Athletics and the aforementioned Rays.

Ironically, Tampa's concrete cavern basically became blackmail to entice, in order, the Giants, White Sox, and Mariners to re-locate. Look at what those clubs have now in comparison.

The stadiums for both teams represent arguably the worst in the league and as such both are currently vying for new ones.

Could the MLB be the second of North America's major pro leagues to join the NFL in having 32 teams?

That likely depends how quickly the NHL balances out its Western Conference. It'd do so tomorrow under the right circumstances, ie-  whenever Seattle gets its act together.

But baseball's grinding its gears up to speed on the matter. Gradually.

Maybe that's why Manfred's putting clocks on everything.