Looks Like It Could Be a Royal Gathering in Cincinnati

Published on 9-Jun-2015 by Trent Jackson 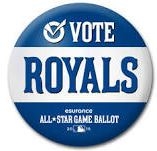 Well the latest All-Star votes are in, and one thing's becoming abundantly clear.

We can probably expect more than a couple of blue-&-gray jerseys on the American League side.

With just under a month left in voting, the Kansas City Royals have seven players leading the starting lineup voting.

That's right, seven. Also known as 78% of the starting lineup; make that 80% if you include the DH:

Safe to say the smaller-market Royals fans are voting to the max.

The junior circuit's defending champs seem to be as in control of the ballots as they were in the playoffs last year. That is, until they dropped Game 7 of the World Series by a single run.

It seems the Royals have quite the fan base right now, but the jury's still out on how many of them were really fans before October 2014. Just saying.

Now, this isn't to say that every Royals fan is a bandwagoner, it just seems that if statistics played a more vital role in the voting, thered be a few less flights from Missouri to Ohio this July.

At least, from that side of Missouri.

As it stands now, the second- and fifth-largest metro areas have one representative each in the starters' list.

Fittingly, this year's classic is in Cincinnati, whose fans stuffed the ballot boxes so profusely -- in the days when it had to be done by hand -- that MLB jerked voting privileges from the public for 13 years.

Maybe Royals Nation took a cue from Latvia. For this year's NHL All-Star game, that little Baltic country basically did a Colbert and mass-voted their only countryman in the league into a starting role.

In what looks to be a Royal line-up, these dudes could very well end up defending behind Félix Hernández, who currently leads the AL in wins with a 9-2 record.

All-Star voting will conclude on Thursday 2 July at 11:59pm edt. And you can only vote 35 times.