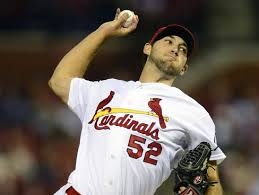 With apologies to Charles Dickens, this season's National League Championship Series is not as much a tale of two cities as it is a tale of two systems.

Los Angeles, of course, is the second-largest metropolitan area in the USA, chock full of cable television subscribers among its population base in excess of 13million.

St Louis is in the heart of what East and West Coasters often dismissively describe as Flyover, USA. It ranks No 19 on the list of metropolitan areas with a population just over 2.7million people. Clearly, cable television subscriptions aren't as abundant.

Before 1959, when the Dodgers and Giants abandoned New York City for Cali pastures, St Louis was the ultimate regional franchise. It was not only the western-most National League outpost of Major League Baseball, it was also the southern-most. This formed the roots of what is now Cardinal Nation. Thus, no team's footprint was as affected by re-location (the Braves from Milwaukee to Atlanta) and expansion (Houston, Denver, Phoenix) as the Cardinals.

St Louis may be one of the founders of the National League and one of the more storied teams in the game, but the reality is stark. The Cardinals are now, at best, a mid-market franchise. There are 20 teams ranked above them:

Notice the ironic inclusion of teams with a reputation of doing more with less, most notably the A's and Rays.

And yet, St Louis is on its way to a third consecutive NLCS appearance. How do the Cardinals do it? How are they in the conversation season after season as World Series contenders?

The answer isn't rocket science. It's their farm system. In recent times, Baseball America has consistently rated it at the best in the game.

The Cardinals are more dependent on attendance for their revenue than most teams, so carrying the reputation as having the most knowledgeable fans in the stands plays a part in its financial structure. Every season, more than 3million paying customers make their pilgramage to Busch Stadium. This allows the team to offer select contracts to core players such as Yadier Molina (five years, $75million), Matt Holliday (seven years, $120million), and Adam Wainwright (five years, $97.5million).

A strong farm system is in the team's DNA. After all, the concept's creator was Branch Rickey, the man who would later sign Jackie Robinson and set the stage for baseball history to be made. Before that time, Rickey was the GM for St Louis and even then recognized his team couldn't match the likes of the New York teams in signing players. So he decided to develop them.

It worked then. It works now.

Notably, while St Louis made a strong offer in an attempt to keep their biggest star, Albert Pujols would have broken their bank if they would have matched Arte Moreno's offer. Cardinal stat geeks saw his declining numbers as a trend and said a ten-year deal would be insane. Seems they were right.

And their solution was to reach into their ranks as they built through the draft. Case in point: the supplemental choice St Louis received as compensation for the loss of Pujols was a pitcher out of Texas A&M named Michael Wacha. Seems like he's paid dividends already.

Rookies have been the story for St Louis in 2013. 12 of them have been pitchers. When the home-grown Allen Craig went down, the Cardinals replaced their offensive dynamo with big Matt Adams, who has been sensational.

Meanwhile, the Los Angeles Dodgers and their $239million payroll were sputtering until they pulled Yasiel Puig out of their hat and Hanley Ramirez realized he wasn't in Miami anymore. They had a choice of riches to make when they drafted Clayton Kershaw, who is one of the game's elite talents, but either way, they couldn't lose; the lefty ace should be a no-brainer for this year's Cy Young award. It took half a season for all this to come together, but the Bums are now playing up to their payroll.

Having noted that, St Louis gets home-field advantage in the NLCS by virtue of the league's best record. And they intend to make the most of it with their home-grown talent. Whether or not they make the most of it remains to be seen, but what's not in question is the strength of their system.

The Cardinals will continue to be in the heart of those discussions against the big spenders for years to come.