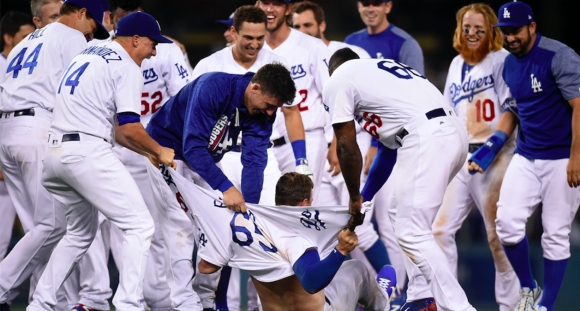 The first MLB at-bat for any player is obviously a special moment, the culmination of years of hard work and sacrifice.

However, some of these at-bats are made even more significant because of the circumstances.

For example, we have the debut of Kyle Farmer.

The Dodgers rookie stepped to the plate for the first time in MLB with his team down 2-1 in the bottom of the 11th inning and two runners on base.

He then proceeded to do this:

Obviously, this was insanely clutch, but it also represented the proverbial nice piece of hitting, as Farmer took the pitch to the opposite field instead of trying to pull it.

There aren't all that many hitters, let alone rookies, who are capable of such things.

So take a bow for that as well.

Of course, most rookies don't come up to the plate for the very first time in such a difficult spot, so the stars had to align just right for this one.

Also, if you start the ballgame in your debut, you can't very well have a walk-off in your first plate appearance.