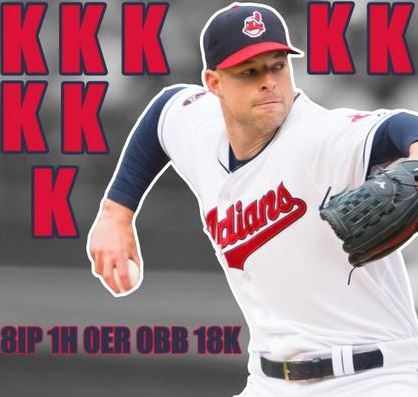 Nothing is going right for the city of Cleveland, unless maybe you're a Cavalier fan.

But there was no LeBron James at Progressive Field on Wednesday night.

Then again, when it comes to baseball, he's no Michael Jordan. Probably a good thing.

So, who was left to help revive a Cleveland Indians squad to improved its moribund record? They stood at 11-20 going into that game?

Well, how about Corey Kluber?

The 2014 American League Cy Young Award recepient went historical against the St. Louis Cardinals and their best record in baseball. But they weren't prepared for Kluber, and he made them pay.

One hit and a mere 18 strikeouts. No big deal, right?

Well we haven't seen anything like this since Roger Clemens wowed us in 1998. Pre-juice Clemens, hopefully? An undoubtedly clean Kluber dominated St Louis in every facet possible. His control was precise and his demeanor, always composed. He didn't allow a hit until the seventh inning. Even after giving up the no-hitter, Kluber continued his incredible performance into the eighth before Cody Allen mopped up in the ninth.

Incredibly, this was the Tribe ace's first win of the season, and he awakened memories of Bob Feller in the process. The Hall of Famer had his own 18-punchie outing back in 1938, which one-upped the 17 he notched to match his age in his rookie season.

The city of Cleveland needs to wake up. A lousy crowd of only 12,000 fans witnessed this gem.

The Tribe's bats could use a caffeine bomb, too. In today's matinée, Trevor Bauer followed Kluber with a four-hit, 10-strikeout performance over seven-plus innings, but that wasn't enough to overcome a Matt Carpenter two-run bomb in the eighth and register a 2-1 win.

What's a Clevelander to do but say, Go Cavs?