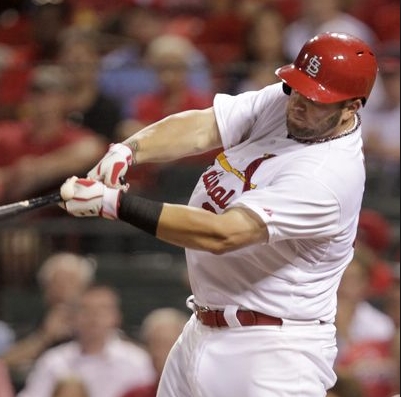 A staff ace is expected to make regular visits into the seventh inning and sometimes beyond.

Especially when he's compiled a 21-3 regular-season record with a superhuman 1.77 ERA.

However, by the seventh inning, opposing batters are going to be seeing what that ace has been featuring for a third time. And in this NL Division Series, that third time's a charm for the St Louis Cardinals.

Whatever the Cards see from Clayton Kershaw by then -- as with the Bums' relievers in Game 2 and Game 3 -- it's evident they've gathered enough notes to mount a game-changing rally. And they do. Matt Adams did the honors today.

Game, set, NLCS next for the Redbirds.

In this do-it-or-screw-it game for Los Angeles, their $215million southpaw had limited St Louis to one hit and two walks in hte first six frames. He sailed through the lineup, working on three days' rest instead of his usual four. The Cardinals may not have been getting hits, but they were logging strong ABs so as to run up Kershaw's pitch count.

Shelby Miller had kept St Louis within reach, experiencing only a two-run hiccup in the sixth that included Juan Uribe nicking Seth Maness for an RBI single that gave the Dodgers a 2-0 lead.

Kershaw was still pitching in the seventh because the Los Angeles bullpen because, among other factors, manager Don Mattingly couldn't trust his relievers. How deep was that feeling? Deep enough to watch Matt Holliday line a single off 2B Dee Gordon's glove, followed by Jhonny Peralta's single up the middle that deflected off SS Hanley Ramirez's glove. Kershaw did still have velocity, but he was missing his spots.

And not only did he miss a spot to the dude St Louis calls Big City -- he's from rural western Pennsylvania; go figure -- Kershaw hung his first curve of the game.

The good news: he'll still pick up his third Cy Young Award. The bad news: it won't fit on his finger like an NL pennant or World Series ring would.

As to the victors, the Cardinals were the first to go goggle in locker room celebrations. Now, they're the first since then to go without. Sort of a champagne commando thing.

And a beer gun thing.

This will be St Louis' fourth straight trip to the NL Championship Series. They're clearly doing what they can to keep it from getting old.