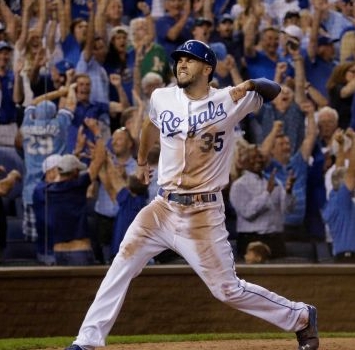 Just how high are the limits on MLB players' credit cards? Or do they all carry the we-dare-you plastic of American Express?

Clearly, the first case study should be Eric Hosmer.

Not only did he benefit from super-agent Scott Boras negotiating his 2014 salary to $3.6million from 2013's $528,250, the Kansas City Royals' slugger hasn't forgotten where most of that dosh comes from. So when it's time to celebrate, he spreads it around.

Best of  all, dude laid his credit card down at the bar. He treated all comers for more than an hour.

So, with the average mercant's fee of 2% for accepting plastic, there's a credit card company out there that just became a Royals fan.

And Hosmer otherwise also figured prominently in the proceedings:

KC ace Big Game James Shields lived up to his billing with that support and the by-now-commonplace ubiquitous outfield play from the likes of Lorenzo Cain, who produced these gems in the fifth inning:

First of all, it appears Oakley and adidas made the Royals lay down their plastic to buy the goggles. Why else would there be two manufacturers on display?

Secondly, for all that's made of manager Ned Yost's funky game management, he's got gazelles roaming the keystone and outfield along with hitters who he quite rightly said have risen to the occasion. And it doesn't hurt to boast a solid rotation backed by a deep bullpen. That mix can cover for a multitude of quirks.

Up next is the franchise where Earl Weaver reduced strategy to the three-run homer long before the sabremetric geeks confirmed it as a superior tactic. Yost spent much of the year with little hope of deploying it -- Kansas City was the only team to not hit 100 dingers in 2014 -- his thumpers have given him that luxury now. At least, for now.

Meanwhile Eric Hosmer expects to keep 'em coming. Both on and off the field.

And put it on Hosmer's tab. He'll be fine with it.