Kansas City Kicks Its Way into the World Series 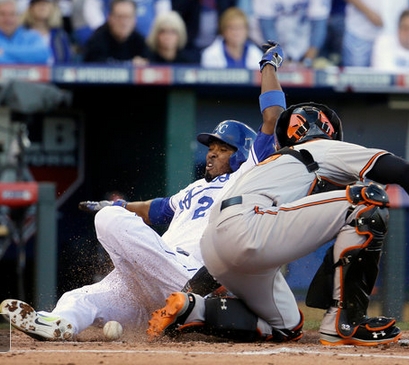 His season with the Montréal Expos had lasted only five games. The backup catcher who came up with the Milwaukee Brewers in 1980 realized the only way he'd stay in the game was to become a coach.

And he probably realized it while sitting at home. On a couch. Watching the World Series.

History was made on more than one front.

Little did Yost know that after a long tutelage under Atlanta's Bobby Cox, a quirky run in Milwaukee, and nearly four seasons in Kansas City of securing his reputation for bizarre decisions, he'd be the dude to lead the Royals to the World Series again.

During Kansas City's improbable eight-game post-season winning streak, Yost has been rolling sevens with those decisions. But the weird remained wonderful for his Royals, like how the winning run scored to seal the sweep of Baltimore:

The ultimate coincidence would be for Kansas City to face St Louis, but the San Francisco Giants still have a say.

That's one post-season choice out of Nedley's control. He's probably fine with that.