Just Ass Expected: Astros' Buttslide Is the Beginning of the End for Sports Journalism

Published on 18-Sep-2013 by Xavier McSpaniel 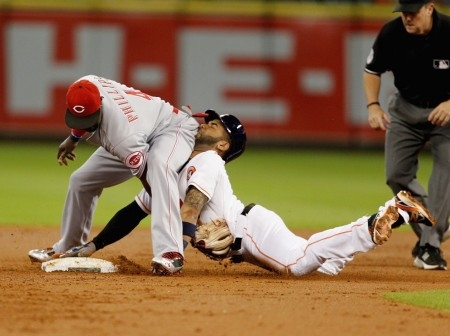 No, ladies and gents, this is not tool time on the tube.

Not content with trotting out 'Buttfumble' for the rest of eternity, the back-page press got to fill their pants a second time, courtesy of the Houston Astros' Jonathan Villar. Sliding into second base against the Reds Tuesday night, Villar failed to notice Brandon Phillips' perched backside blocking the bag.

It is only a matter of time before the NHL and the NBA have their own butt-blights for the hacks to gleefully disseminate: sometime in December, we'll watch Alex Ovechkin perform a patented 'Buttdangle' during an overtime shootout; at All-Star weekend, we'll marvel as LeBron wedges the ball between his cheeks and 'Buttdunk's for the adoring crowd.

When those clarions inevitably call, all Four Buttmen of the Apocalypse will have been revealed to the world. They will lay waste to the legacy of AJ Leibling, George Plimpton, David Halberstam, Robert Creamer, Melissa Ludtke and other luminaries while the 'Four for IV' ESPN film, 'Butts of the Joke', marks our final descent into everlasting Hell.

Howard Cosell, help us all.