Joe Gets Maddon at the Cardinals 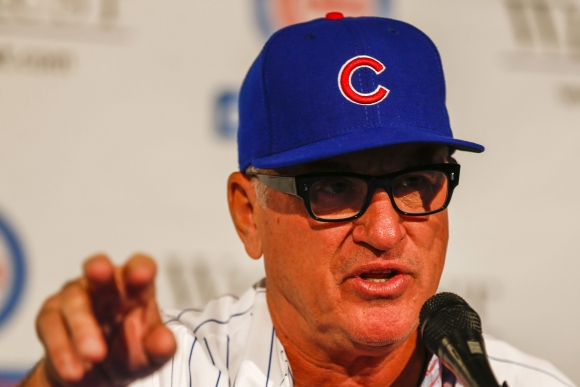 Joe Maddon has been nothing less than a miracle worker in his first year as Cubs skipper.

Dude's taken what boy wonder Theo Epstein and a huge war chest have given him and turned a perennial loser into a possible World Series contending team.

He also brought his affinity for mind games with him, but more on that later. First, it's been basking time for Cubs Nation ever since he blew into town:

While the Cubs have yet to clinch a playoff spot, it's all but a formality now. Their burgeoning lead over the San Francisco Giants and Washington Nationals has allowed them to set their sights upward in hopes of stealing the division away from their fierce rivals, the St. Louis Cardinals.

They've made the most of it, taking the first two games in this weekend's series at Wrigley, with today's 5-4 squeaker only sealed when SS Addison Russell's diving stop in the ninth squelched a rally by forcing Tommy Pham's potential tying run at second.

The Cubs ran away with yesterday's 8-3 victory, but it paled in comparison to the war that broke out.

Chicago chucker Dan Haren went inside on Matt Holliday and nailed him in the head. The incident seemed innocent enough, but who really knows? Haren seemed remorseful for his mistake and catcher Miguel Montero tried his best to help Holliday support himself.

However, the Cardinals seemed to take offense to the plunking, and decided to take revenge. Antony Rizzo, being the face of the Cubs, was the perfect target of choice:

Keep in mind Rizzo leads the majors in being hit by pitches with 29 zaps. It's not really a surprise, as he's a leading practitioner of diving into outside offerings. Pitchers with cojones come inside to keep him honest. Sometimes they go too inside.

Luckily, the umps prevented Rizzo from escalating the incident into a physical fight. However, this didn't stop Maddon from going after St Louis in his post-game interview.

The Cubbie skipper ripped into the Cardinals, mocking them as being a vigilante group:

Maddon's diatribe plays well as sound bites in the ADD that is today's 24/7 news cycle.

It's notable, though, that Maddon watched two Cardinals get hit today, with the second causing his and his closer's ejection. Cardinal pitchers didn't hit anybody.