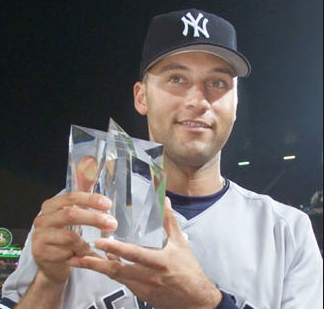 Once again, as MLB boasts, the All-Star game is for real.

And for the second year in a row, it's real in more ways than settling who gets home-field advantage for the World Series.

Last summer, it was Mariano Rivera being feted for a spectacular career, and having it done in a most spectacular manner.

This year, it's the Yankee captain's turn. No idea if the players have anything special in store for him, but Michael Jordan's Nike brand does, and here it is:

For the record, this production rolled out the heavyweights to doff their caps:

Toss in a trio of face-blurred-to-protect-the-guilty New York Mets, a couple of mascots, the New York cops, and a neon sign, and there's a classy 90-second tribute that will live in cyberspace forever.

The best touch, though, is the inclusion of everyday Gothamites. They're the ones who spun the turnstiles, tuned in the games, and knew that whenever Jeter took the field, he'd never give less than his best.

And he's the same around them as he is around the glitterati.

This may be Jeter's last classic of any kind, as the Yankees will need to turn it up to make the one scheduled for fall. But the Mid-Summer variety is a perfect setting for tributes. Like last year and Cal Ripken's final bow in 2001, when he personally made it a swan song to remember:

It's notable that the last jersey in that clip's view is a Pinstriped No 2.

While on the subect of the Big Apple's heart and soul, a uniquely New York flame was extinguished over the weekend. The last original Ramone, Tommy Erdélyi, succumbed to cancer. Metallica, whose Enter Sandman introduced Rivera to Yankee home games throughout his career, joined virtually every major rock act from the late 1970s onward in citing the outcasts from Forest Hills in Queens as the major influence in their careers.

He, too, will live forever in hearts, minds, and cyberspace.