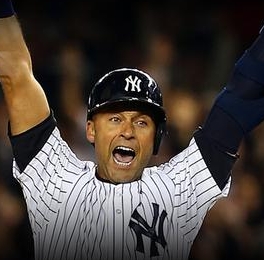 Kudos to the last Yankee ever to wear a single-digit number on his uniform for delivering in the limelight one more time.

But how did it happen?

Not the magic of driving a walk-off single oppo in his final home game ever.

How did Derek Jeter even get a pitch he could drive? And where did the PA dude grow up? The Hamptons?

The Yankee captain with a litany of heroics over an illustrious career not only capped the night with yet another memory for the ages, he also eliminated the Baltimore Orioles from having any chance to catch the Los Angeles Angels for the American League's best record.

In the larger scheme of things, that's sort of a big deal, too. Best record gets home field advantage in October.

Granted, the Orioles are three games behind the Halos with three games left to play. They wrap the regular season in Toronto, where the Blue Jays just pushed the Seattle Mariners to the brink of playoff consideration. The Angels finish in Seattle. Baltimore would need a sweep and hope the same for the Mariners, who cling to a slight chance of October baseball themselves. Stranger things have happened.

Like the Milwaukee Brewers and Oakland Athletics going stone cold after the All-Star break.

What would the Black Knight do?

Orioles manager Buck Showalter certainly doesn't owe the Yankees any favors. And he's not the sentimental type. Why didn't he order an intentional walk for Jeter and set up a double-play possibility?

Yes, he would've needed a police escort back to the hotel, but that was the percentage move.

Maybe he elected to have Meek tickle the black and try to get Jeter to go after something hard to handle. Catcher Caleb Joseph set up middle-out, and it appeared he called for a secondary. If so, Meek hung it and did so over the main course section of the plate. But that makes as much sense as a heat-seeking missle hitting an igloo. A late-inning reliever is going to miss low and away, if anything.

Unless he's got a masochistic wish to be this generation's Al Downing.

Whatever. Jeter's got his storybook sendoff. And the Orioles just made their weekend games academic.