Jeter Returned, then Left; A-Rod Still in His Own World 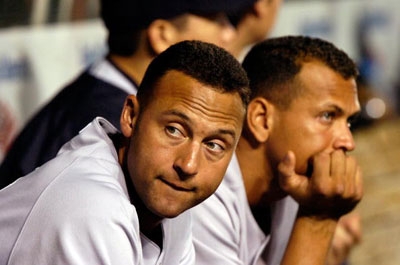 But, as Derek Jeter rejoined the New York Yankees on a rain-soaked Thursday afternoon in New York, a good number of statements were being made and questions being asked about what Derek Jeter means to the Yankees. And before thoughtful responses could be formulated, Jeter was back in the trainer's room once again.

You don't have to be a huge sports fan to know why those in attendance at Yankees Stadium erupted with a standing ovation when Jeter stepped into the batters box. After all, he is the Captain, El Capitan ... a champion. He is the Yankees all-time leader in almost every offensive category. All appearances indicate that Jeter is the perfect teammate, universally respected around the league, and a great citizen.

By contrast, all appearances indicate that A-Rod is a cheater (steroids and god-knows-what-else), a punk (slapping ball out of First Baseman's glove; shouting at third baseman as he rounded the bag on a pop fly), and a bad teammate (trying to 'pick up' girls from the dugout during games).

Nearly a decade ago, when A-Rod joined the Yankees, we were all concerned about two things. First, was he really worth the 10-year, $250million contract he was playing under. (I mean, who is? Right?) Second, would he accept a move to third base and not be a distraction, secretly wanting to replace Jeter at shortstop? (A-Rod's natural position)

Nine seasons later, oh, how things have changed for A-Rod! You would be very hard pressed to find a Yankees fan that actually wants to see him back on the major league roster. If he does make it before the reported steroid suspension takes place, he will be very harshly booed by the Yankee faithful.