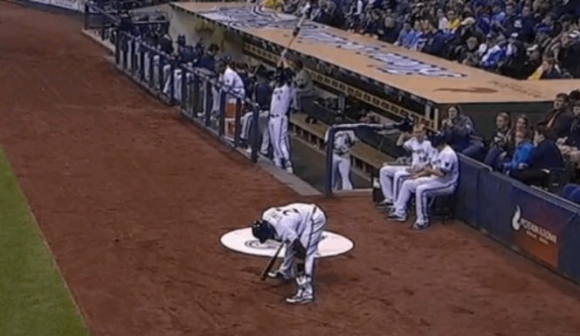 The Milwaukee Brewers are off to a scorching start to their 2014 season, currently leading the NL Central.

However, while things are going well on the field, there is all manner of chaos taking place in the dugout.

On Saturday night at Miller Park, while the Brewers were dispatching the Chicago Cubs, an odd and ugly incident took place off the field.

Ryan Braun, who is producing on the field while still attempting to rehabilitate his drug scandal tarnished image, was at the top of the dugout steps in anticipation of his upcoming plate appearance. This position is commonly referred to as being in the hole, for those of you not well-versed in all that fancy baseball industry jargon.

Before assuming his position in the on-deck circle, Braun was performing his standard ritual, which is an elaborate process that includes an over-the-head bat windmill routine. Apparently, this occurs before every single Braun plate appearance, but shortstop Jean Segura, immersed in thought and blissfully unaware of the danger lurking nearby, walked right into the Braun backswing.

As you can see, that was no love tap. Segura absorbed the full impact of the swing.

Despite the nastiness of that scene, Segura appears to have escaped major injury, although he did require some stitches, courtesy of a plastic surgeon. Braun was appropriately apologetic after the game, something he has become quite adept at doing.

"You never want to see something like that," Braun explained. "It breaks your heart a little bit. Obviously, it's never something done intentionally but whenever you're involved in a situation like that it puts life in perspective ... Thank God, from everything we've heard, he's OK. It could have been a lot worse."

It could have indeed been much worse, but Segura appears to be fine and will probably avoid a stint on the disabled list.

While the incident was unfortunate, it seems that players could perhaps be a bit more observant in the dugout. Actually, it's remarkable that this sort of thing doesn't occur more frequently. Obliviousness can be painful, which is actually a good lesson for the kids.

Anyway, after encountering the Braun windmill, Segura may just become an advocate for solar power or other alternative energy sources.