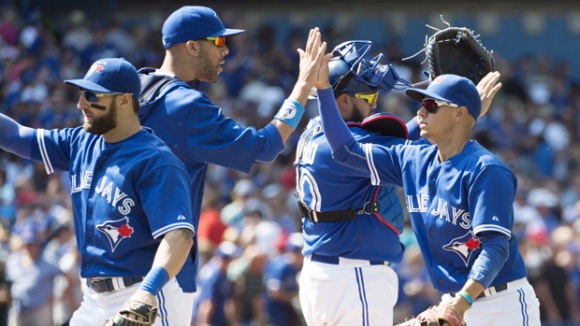 Rewind two weeks and take a look at the AL East.

At that point, anyone woulda said the New York Yankees were a virtual lock for the division pennant.

For the first time in three years, October hopes in the Bronx were as high as ever.

So, what the hell happened?

The rapid change in the AL East is astounding, but breaking the situation down piece-by-piece, it starts to make some sense.

Start with the 31 July non-waiver trade deadline. On that day, the Yankees were playing at a .569 clip and were six games up on Baltimore and Toronto, who were tied for second and vying for a wildcard.

The Bombers were in the best position they could expect at the end of July and were probably feeling pretty good. The only weak point seemed to be their starting rotation.

Who knew Opening Day carried such an ominous omen?

With no real staff ace -- though several should be able to fit the bill -- the rotation has spent the season hemorrhaging runs early in games, but New York's offensive resurgence and lights-out bullpen were able to right the ship enough to keep them on top.

In order to lock down that pennant, they'd need some fine tuning in their five-guy cycle and likely have to make some tough calls as to the cost in prospects. In pursuit of their ace, many offers were likely tabled for deals with the Phillies, Tigers, and Reds. But nothing tempted them to tamper with their touted farm system, where some of the top MLB prospects are stretching their legs, waiting for the call.

For example, there was no way the Yanks were gonna part with the likes of Luis Severino:

Brian Cashman has been resolute in his stance on not sacrificing the future for the present day -- as opposed to Toronto's approach -- which is fine, but inactivity can be costly. And when the offense that's put them on top and the bullpen that's kept them there start to fail, that's when trouble strikes.

Currently losers in six of their last eight, the Yankees August record is an abysmal 4-7 right now.

How times have changed.

Revert again to the non-waiver trade deadline. Six games back in the division, the Jays were still very much in the race for awild card, if not the pennant. With a plethora of contracts set to expire soon and some key offensive players aging, the Blue Jays saw this as their last chance for a big season, and they went for it.

Alex Anthopoulos was well aware the team hadn't seen October ball since winning the big one in '93. And with the many recent firings and hiring in the MLB, he knew big moves were needed to keep his job intact. Gambling hard, dude's done all but traded the Jays' entire prospect field for big bats and bigger arms.

In the week of the trading deadline, TO grabbed headlines by dealing for Troy Tulowitzki and David Price. Trading José Reyes to take on Tulo's hefty contract and making a 3-for-1 southpaw prospect trade for two months of Price were certainly bold moves. But to say it's paying dividends already is an understatement.

With wild card hopes now seen as a sign of underachievement, the Jays' full focus is on winning the whole damn AL East and playing all the way through October.

And if August is any indicator of how the rest of the season will go, it'll be a bitter fight to take the pennant from TO this year.

A one-game lead amidst the dog days is hardly commanding, especially when that deficit is in the loss-column, but the swiftness of the Blue Jays' ascension proves that the Yankees need to make some serious changes to get it back.

But with only the waiver deadline left to find a momentum changer, they'll be looking for needles in the proverbial haystack.