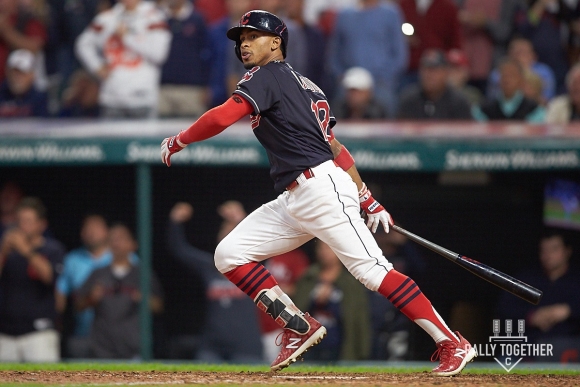 This win was earned.

There was an intense distinction between the Cleveland Indians and Kansas City Royals as this four-game series opened at Progressive Field:

Kansas City came within one strike of victory in the bottom of the ninth, but no:

Cleveland didn't make the most dynamic trade in August -- that'd go to Houston -- but the fact that they're 31-5 since acquiring Jay Bruce from the Mets speaks for itself.

Actually, the Indians are so hot right now, the Astros may well be elated they've got Justin Verlander should the two teams meet in October.

To be fair, Kate Upton would probably be cheering no matter what, especially now that she and hubby-to-be finally found a nice neighborhood to put down stakes.

Meanwhile, neither the Indians nor the 'Stros wanna put down anything until they've won 11 games in the post-season.

The Royals and their fans have a not-so-distant feeling of what that's like.

If they want it again, they have a tall order ahead of them the next two weeks:

So the Royals are desperate, and that makes them a more dangerous foe than their usual formidable selves.

Cleveland's 10-6 against them this season, but this series shapes up to be their most challenging yet if they want to overtake the 1916 New York Giants' MLB-anointed record of 26 straight triumphs.