Opening Day is just over a week away, and the Boston Red Sox have yet to answer one of their biggest questions this spring: what is going to happen to Jackie Bradley Jr?

The young phenom seems like a godsend; he is easily one of the Sox’s best prospects -- possibly one of the best players on the team right now -- and is Boston’s answer to the likes of Bryce Harper and Mike Trout. He plays flawless defense and is hitting .444 so far this spring, so will the Sox keep him or drop him back down to the minors? There are some pros and cons to either decision the Sox make, but they need to decide soon because they are running out of time.

Let’s face it, the Red Sox are boring. They can’t give tickets away anymore, their phony sellout streak is coming to an end, and after the debacle of 2012, they haven’t done much to infuse the team with any excitable talent. Boston could use the addition of youth and zeal that Bradley brings to each game; he’s a dynamic player to watch and projects to become a perennial all-star. Imagine Jacoby Ellsbury, but leave out the part about getting hurt every year. Having Bradley as the starting right fielder, Victorino playing left field, and Jonny Gomes as the DH could be a good move for the few months it will take for David Ortiz to come back from the DL.

Manager John Farrell and GM Ben Cherington have been mum on the issue over the past month, refusing to give direct answers to any question. Still, Cherington has not said outright that Bradley will be sent down and even hinted there is a chance fans could see him on Opening Day.

Bradley may have already captured many hearts, but teammate Jonny Gomes is urging that people tone down their enthusiasm. It’s not that Gomes is worried about playing time -- but who knows, that could be part of it -- he has been stressing the importance of adapting slowly so as to not rush things too quickly. In spring training, Bradley has been facing much weaker competition than he would face daily at the Major League level. While he's hitting .444 now, that average could drop quickly when he faces the likes of Justin Verlander or CC Sabathia.

The Sox need to make a decision, and soon. Do they bring Bradley up and risk his not being ready or possibly throw the first month of the season by giving his spot to a less deserving player? Let’s hope Cherington puts the good of the team first but that he doesn’t forget about 2013 and that the Sox need to do well this year.

Otherwise, they risk being a last place team with Tampa Bay-esque turnouts to games. 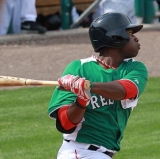