Is Chris Davis the Real Deal?

Published on 3-Jun-2013 by Tyler Scionti 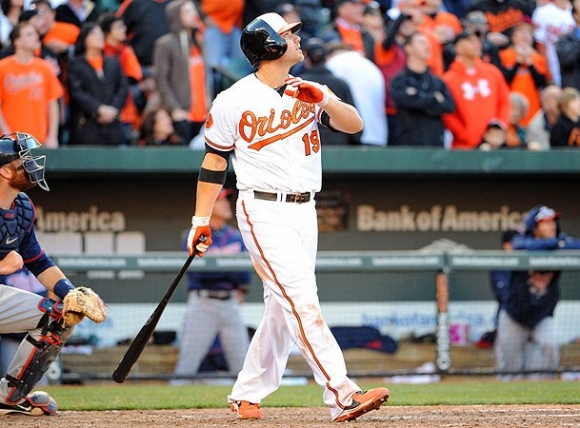 So far we are roughly just over a third into the season, and apparently every baseball guy has pegged the Orioles’ Chris Davis to win the Triple Crown, beating out Miguel Cabrera's attempt to repeat that feat.

Davis has shown some stretches of consistency and has had decent power -- when healthy, that is -- according to former teammate Michael Young.

Davis’ career season high for home runs was 33, which he hit in 2012. Now with 20 on the season, he surely will surpass that mark and then some. As of now, Davis is hitting at a .357/.440/.754 line with 20 homers and 52 RBIs in 56 games. Those stats are through the roof, literally, as Davis has been hitting the ball out of the park at an impressive rate. The big question surrounding Davis is, can he sustain it, and if so, will it be enough?

I highly doubt that Davis will finish with the 57 homers and the 148 RBIs he is projected to accrue, but there is no reason he can’t finish with 35-40 and easily above 100 RBIs. Then there is the question as to whether or not it will be enough for a Triple Crown title.

At the very least, Davis can rest easy knowing he stands a very good chance of making the All Star game, which is saying something when you are in the same league as Albert Pujols.

Projections are dangerous assumptions, of course. Athletes aren't machines, and August can be rough when a baseball team isn't in contention for a playoff spot. The Orioles plan on being in the thick of things, but even that assumption can be a bit of  reach.