If You Build It, They Will Come, Unless You're the Miami Marlins

Baseball's Opening Day is much more than just an event, it is an experience.
In most MLB ballparks, Opening Day tickets are a hard to score, no matter how poor attendance may be for the rest of the season.  But once again, Jeffrey Loria's Miami Marlins are the exception.
The Marlins are not the first team to use Groupon for ticket sales. Major League Baseball announced in November a partnership with the flash-cash discount site. The Marlins recently used Groupon to sell tickets to the World Baseball Championship games played there earlier this month.
But this is Opening Day we are talking about! Not an off-day during the middle of the season!
In the wake of Loria's serial hypocrisy -- only Lucy pulling a football away from Charlie Brown comes close to his level -- public relations are so bad for the Marlins that the team is offering deals for up to 50% discounts for Opening Day tickets. Adding to the madness, Miami's only team with a real fish for a mascot is even offering merchandise vouchers and free tickets to another game if fans buy Opening Day tickets. Not to mention that Opening Day lands on All You Can Eat Monday, which hooks you up with free and unlimited hot dogs, peanuts, popcorn, nachos, and sodas.
So even if you have no interest in seeing the Marlins, you can eat and drink yourself into a caloric stupor.
This state of affairs is a total embarrassment for the team, and it really makes you wonder how they'll manage ticket sales for the rest of the season.
Honestly, if the Marlins can't give away tickets to the most desirable game of the regular season, how are they going to be able to bribe people into their games when there's 100º heat in the middle of July against the likes of the Padres or the Mets? They may have to sink to creating promotions like Gunpoint Night; bring in someone at gunpoint and get in free. Even then, it's possible some of those targets would strongly consider the alternative.
Voters and public officials in Florida may have puzzled political pundits in recent times, but there is no doubting where the Miami metropolitan precincts stand on the Marlins ownership. They indeed have long memories. And this time they're voting with their pocketbooks. 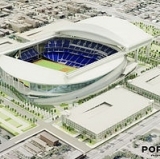