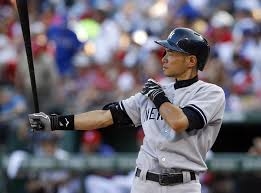 Even as a young Japanese player, Ichiro Suzuki was a phenom.

The ability to consistently hit 90mph fastballs is an art. It takes massive amounts of focus, concentration, fast hands, and a tremendous work ethic.

Ichiro epitomizes these attributes. He is an artist when it comes to hitting. Some baseball players are considered 'slap shot' batters. They lack raw power to effectively drive the ball deep.

Although Ichiro is a singles maniac, he certainly isn't a 'slap shot' batter by any means. He frequently goes long during batting practice, but his approach to the game is much different than most others. He understands that home runs, although exciting, aren't always necessary. Creating opportunites, by singling or stealing a base, sets up your offense for success. Any leadoff hitter knows this, but Ichiro has perfected it.

After over a decade in the MLB, Ichiro simply gets it. He arrives early to practice and stays limber while he's playing. He quietly rips opposing pitchers to pieces. With  single here, a double there, and an occasional home run, Ichiro can do anything it takes to help his team. Unfortunately, he played in Seattle for 11 seasons. His hitting was revered but he never had the chance to transition that skillset onto a winning Seattle Mariner club except for one incredible season in 2001.

Ichiro spent several seasons with the Orix Blue Wave. He was a superlative hitter in the Nippon Professional Baseball League, which ultimately inspired him to new challenges, which meant trying his hand in the MLB.

Those several years cost him the opportunity to pursue Pete Rose's all-time MLB hits record, but frankly, there was no market for his services in MLB back then. Only power hitters were of interest to the American clubs, and established power hitters, at that.

Over the course of his baseball career, Ichiro has now racked up 4,000 hits and still has plenty still left in the tank. With 27 less games in the NPB, Ichiro could have had a very good chance at the record if he had started his career in America.

Perhaps his tenure with the Blue Wave -- who, incidentally, have now morphed into the Buffaloes -- helped to significantly develop him into the person and the player he is today. Maybe that time in Japan was necessary in order to perfect his craft.

With other athletes constantly making headlines for all the wrong reasons, Ichiro has been a true ambassador for not only his home country of Japan, but for Major League Baseball  too. He is the true definition of what an athlete should be. He is humble, ambitious, driven, willing to listen, adaptable, and his positivity speaks volumes.

If only his peers could follow in his footsteps.