Published on 8-Aug-2016 by Alan Adamsson 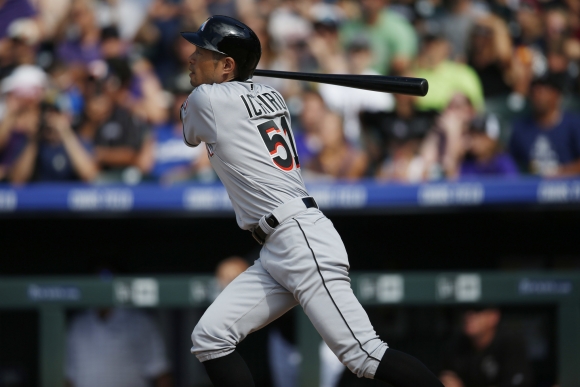 OK, it wasn't as transcendent  as Ken Griffey Jr popularizing the backwards cap in modern society.

But Ichiro Suzuki's distinctive pre-load salute in the batter's box has become a mainstream trend throughout baseball in North America.

16 seasons of MLB success after 8 successful seasons in Japan can make one a trendsetter.

That what this pose he brought to North America in 2001 became: And in Denver, Colorado yesterday, it preceded his corkscrew swing like it has so many times, now in pursuit of his 3000th MLB hit.

At least one of Kurasawa's classic Seven Samurai would be proud:

And now, Paul Molitor has company.

He's the only other member of MLB's 3000-Hit Club who reached that milestone with a triple:

Suzuki will spend the rest of the season as a bit player in Miami's race to October.

If it's down to him, this won't be his last rush to the playoffs, either. Dude wants to play until he's 50.

Maybe he will keep Pete Rose needlessly whining for another eight years.