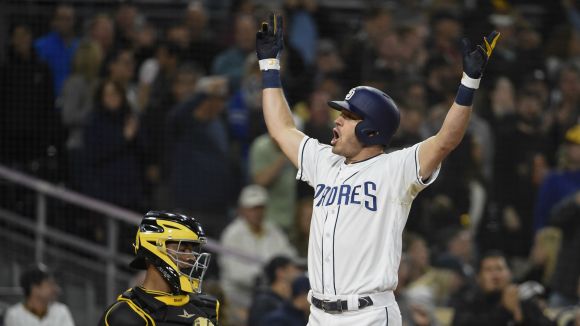 Ian Kinsler has been a darn good ballplayer for a pretty long time now.

However, the ravages of age may finally be nipping at his heels.

The just about 37-year old infielder is in his first season with the San Diego Padres, but things aren't going all that well in his new MLB city.

Apparently, the courtship period between Kinsler and Padres fans has been a bit awkward with the paying customers deeming it necessary to remind the veteran that he's hitting under .200 and actually producing a negative WAR number for the season.

Well, it appears the relationship has deteriorated even more dramatically than we realized.

A few nights ago at Petco, Kinsler went very deep for a go-ahead three-run shot in an eventual 4-3 Padres win over the Pirates.

Dude certainly got good wood on that one, and the bat flip was top-notch, but Kinsler seemed to be yelling about something as he crossed home plate.

Hey, let's get a closer look:

Ian Kinsler told his own fanbase tonight to “go f*** themselves” after homering. pic.twitter.com/yMKRDrmM2C

There seemed to be a season's worth of frustration purged on that one swing, but our emotional friend isn't exactly owning his colorful message to the Padres fanbase.

Think about the children.

Kinsler's story remained consistent in the face of that media barrage, so we'll leave it alone.

And that was definitely not Kinsler chatting with a Padres fan after the game.