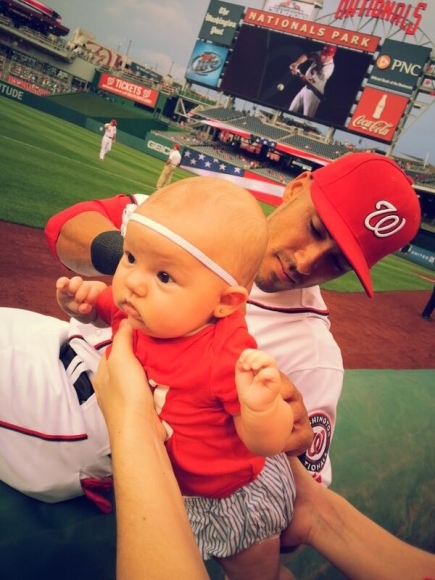 We're familiar with the weird antics athletes go through before a game.
Some wear the same jockstrap, refuse to shave, eat strange food combinations, avoid cleaning their dirt-filled socks, or just put clothes on in a certain order. They all do it.
While sports may seem to be a game of physicality or mental prowess, there is another aspect to it. Ian Desmond of the Washington Nationals may just start a new ritual. Last night before the game, Desmond autographed a baby.
What? It's not a typo. He signed a baby!
You might think that's crazy, but afterward, Desmond went 3-4 at the dish with a stolen base and the go-ahead RBI in the seventh inning of a 4-3 victory.
Now, autographing a kid may not seem so wacko, but it does raise a few thought-provoking questions. What if he had started this at the beginning of the season? Where would the Nats be? Or, will he sign a different baby every night?
Who knows?
But don't be surprised if, from now on, instead of hats, cards, or pictures there's a line of little dudes hanging around before games.
DAILY UPDATE