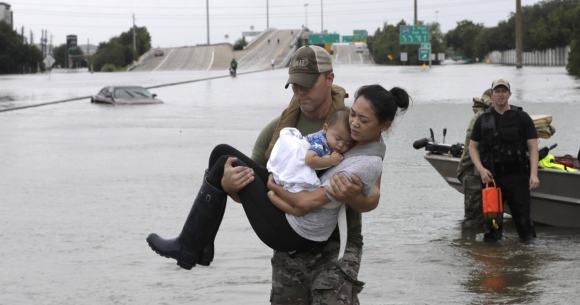 No offense to Houston Texans DE JJ Watt, because he meant well.

But he just had to pull out the old bromide about there are things that are more important than football.

He's right. As in damn near everything else.

And saving lives from the devastation that Hurricane Harvey is wreaking on the USA's fourth-largest city is right at the top of the list.

Any hint of normalcy can provide a modicum of respite for those in situations that are beyond stressful, which is one reason why baseball kept being played during two world wars.

So, for major sporting events scheduled to occur in Houston, the show must go on.

But in light of Houston being deluged by diaster, it must go somewhere else to do so:

MLB scheduling's not quite so simple. The obvious reason is teams play series instead of one-off games.

Had the 'Stros and Rangers moved their three-game set to Arlington, Texas would've been obliged to shift its remaining series with Houston on 25-27 Sep to Minute Maid Park. That would force the Rangers to play four consecutive series -- 12 games -- on the road. Not cool for a team still harboring hopes for a wild-card spot.

A trip like that usually happens to a pro sports team when the circus comes to town. Or something.

It doesn't matter where the games are played for most athletes based in Houston, though.

Like almost everyone else in the environs, they're most likely quite distracted.

Because there are more important things than pro sports.