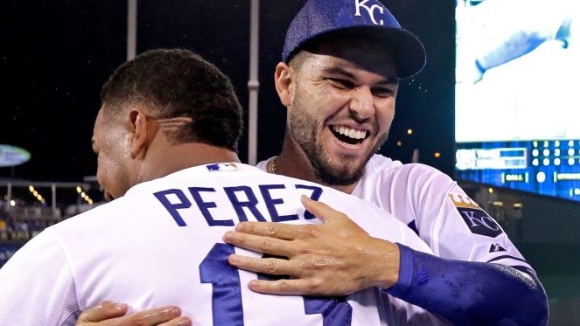 Now, all the Kansas City Royals need to do is find a way into the American League playoffs and win them.

There's still lotsa time left in the season, but the defending champions are currently faced with jumping over three teams to have a shot.

Ned Yost's crew is battle-tested in big games, and those dudes haven't lost their touch.

Perhaps Cueto will be facing his former teammates again in October. This is an even-numbered year, after all.

The Cubs stood up to be counted, too, as opening the World Series at home and getting that extra game there was as relevant to them as it's ever been. Maybe even more. Kris Bryant and Anthony Rizzo had the NL's two RBIs.

All this -- with the exception of Miami's José Fernandez's failure to groove one to David Ortiz -- took place under the guise of a real game, or at least as real as a 25-man roster loaded with baseball's elite could have been.

Incidentally, who was the only other Royal to go deep in the Midsummer Classic?

The best that could be done this time around was dissing the Canadian national anthem.

Really, even -- or especially -- in a showcase game, musical agendas are getting out of hand. The American anthem was introduced as part of the seventh-inning stretch during World War I to honor injured troops before it was even the national anthem.

But that apparently wasn't enough, so God Bless America got the PC nod after the jets hit the towers to honor ... well ...

And now, on top of that bit of historical ignorance, the game's getting its own version of halftime.

Kudos to the Stand Up for Cancer campaign, but did we really have to endure a Fight Song that sounded like two gummy bears melting together?

The MLB suits keep touting that this game's for real, for hard slides and high hard ones come October.

If that's the case, dudes, get a real Fight Song.