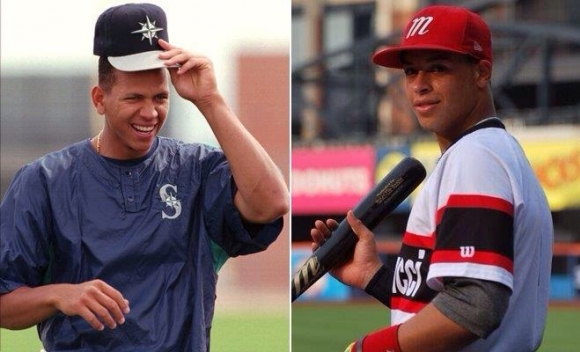 Alex Rodriguez's nephew, Joe Dunand, did something his famous -- or infamous -- uncle never did.

The 18-year-old Dunand finished 10-for-12 at the plate, with nine home runs. That included round-trippers on his final eight swings, as reported by the Miami Herald.

Like his uncle, Dunand is a well-built shortstop and third baseman. He resembles Rodriguez so much that he once played the younger version of A-Rod in a 2007 Dick's Sporting Goods commercial. But let’s just hope the similarities stop there.

The Yankee third baseman has been suspended for the entire 2014 season after allegedly acquiring HGH from the now-defunct Florida-based clinic, Biogenesis of America. When he admitted to using performance-enhancing drugs in 2009, Rodriguez warned his nephew about the dangers of banned substances. Maybe he should have taken his own advice.

Dunand is off to a good start. Perfect Game USA has him ranked No 160 among prep prospects. ESPN Deportes reported he would sign for the right deal out of high school, but he has a scholarship waiting from North Carolina State, which means he wouldn't be eligible for the MLB draft until after his junior season. That may be the better option for him. With time to develop his skills, the young slugger could have his own distinct career that may even surpass A-Rod's.

Time will tell if it’s in the family genes to produce baseball players that excel in the sport. For now, let’s just enjoy his remarkable hitting performance and hope that he builds a career without the stained reputation that his uncle has.