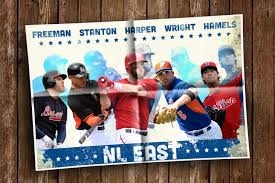 When the smoke clears at the end of the 2015 season, one team is expected to come out on top.

And if you're an American, that would be the club located in your nation's capital, none other than the Washington Nationals. Fear them you must.

Fans in Montréal can take solace in their former team's success, as the Nationals and Mariners are the only two teams that have yet to play in the Fall Classic.

If only the 1994 season could've ended differently.

The NL East projects to be so bad this season that the Nationals could threaten the 2001 Mariners' single-season record for wins: 116.

DC hasn't hosted a World Series game since 1933. That could change very quickly.

The Nats were just awarded the 2018 All-Star Game, so they at least get to play hosts to a gala in the near future.

However, they're thinking of a different type of celebration, the kind that ends in champagne-drenched locker rooms and a ticker tape parade down Pennsylvania Avenue.

They start a little behind the 8-ball with Anthony Rendon, Jayson Werth, Nate McLouth, Denard Span, Casey Janssen, and Erik Davis all currently on the disabled list. Once they regain full strength, look out. Washington's rotation can keep them in contention all season long, with the mega-signing of SP Max Scherzer. Add him to the mix of Stephen Strasburg, Doug Fister, Gio Gonzalez, and Jordan Zimmermann, and this has the makings of one of the greatest rotations of all-time.

Closer Drew Storen needs to prove he can handle full-time duties. If he comes through, the Nats will be in business.

Expect to see a lot of Screech chiming in and providing plenty of post-game antics. It's what he does best.

The Fish are many experts' pick to be a Cinderella team in 2015, possibly earning one of the NL Wild Card spots. They'll have to play exceptional baseball to catch the Cubs and Padres for that spot, though. This is still a young team, and there's plenty of room for improvement.

You know the old saying: It's early!

After emptying the Miami Federal Reserve Bank to give a record contract to OF Giancarlo Stanton, most pundits thought the traditionally stingy Marlins wouldn't have enough dinero left to round out the rest of the team. But they did pull off some other big moves, mainly acquiring SP Mat Latos from the Reds, who aren't really sorry to see him gone these days.

The Marlins revamped their infield, bringing in Martin Prado, Dee Gordon, and Michael Morse after a couple of trades and a free-agent signing.

Another eye-opening signing brought the amenable Ichiro Suzuki to South Beach, as he continues his quest for 3000 hits in 'Murica.

A strange story line during spring training revolved around SP Jarred Cosart's connection to gambling in which it was first reported he bet on baseball. Cosart vehemently denied the accusations and said he would never bet on baseball. Yeah, we've heard that before. Cosart was fined an undisclosed amount for placing illegal bets with a bookie, which is also a no-no in baseball lore.

What are these guys supposed to do with their millions? Invest wisely? Save for retirement? Pay mistresses hush money? Oh, the possibilities are endless!

Basketball is king in Miami, although the King -- the hoops version, as there are others; right, Mariners fans? -- now plays in Cleveland. Wait 'til next year, Marlins faithful, and hope your next World Series championship doesn't preclude another fire sale.

Those are some expensive fish, as opposed to ...

The Bravos had perhaps the busiest and most puzzling off-season of any team in the National League, and possibly all of baseball. Although the A's and Padres gave them a run for their money, trading players like commodities on the NYSE.

One last final doozy came the day before the season started when they shipped stud Closer Craig Kimbrel, and The Player Formerly Known as BJ Upton to the Padres for an injury-prone outfielder (Carlos Quentin), a busted prospect (Cameron Maybin), and, of course, a couple of prospects.

In another blockbuster trade, Atlanta sent OF Jason Heyward and RP Jordan Walden to the Cardinals for SP Shelby Miller and a couple of farmhands.

They followed that up by signing free-agent OF Nick Markakis to a 4 year, $44million contract. They must've been mesmerized by that Gold Glove he won last season with the Orioles. Never mind that; Heyward earned a Gold Glove, also.

I'm picking the Braves the finish third simply because of their rich tradition of winning and the fact that they get to play the Phillies and Mets a whole bunch of times. It's entirely possible they pick up wins against the Nationals and Marlins, too, but there will be no Tomahawk Chops in October, so cling to the fact that the Atlanta Hawks will likely be the No 1 seed in the NBA playoffs.

Maybe the Braves can borrow some of that fake crowd noise that obviously worked so well for the Atlanta Falcons over the past couple seasons. Nothing gets Turner Stadium crowd going like some white noise.

Come to think of it, wasn't it the perceived lack of white noise that got the Hawks in hot water?

It's difficult to take a team seriously when your idea of an Opening Day starter is Bartolo Colón. OK. so he beat the Nationals, whoop-tee doo!

Actually, the Mets' rotation will be the highlight of their 2015 season, with phenom Matt Harvey returning from Tommy John surgery, and defending Rookie of the Year Jacob de Grom -- it's Dutch, dammit! -- bridging the gap to Dillon Gee and Jonathan Niese. 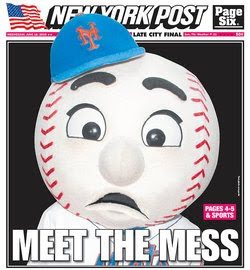 touch home plate. If 3B David Wright doesn't return to form, there are going to be lotsa snooze fests at Citi Field. You almost said Shea Stadium, didn't you?

Their lone free-agent signing was OF Michael Cuddyer, who won a batting title with the Colorado Rockies in 2013. Mets GM Sandy Alderson certainly understands topography and the aerodynamics on a baseball in the thin air of Coors Field, doesn't he? The elevation in Queens is 85 feet. You won't even reach first base.

Mr & Mrs Met will surely enjoy that beautiful, bailout money-funded ballpark, because the product on the field won't give them much to smile about. Doubtful draping a paper bag over their heads will do much good. Maybe a Hefty Bag.

I'm at a loss for words.

Why Ryan Howard, Chase Utley, Cole Hamels, and Jonathan Papelbon are still on this team is beyond me. Actually, it's beyond Papelbon, too.

Losing 8-0 to the Red Sox at home on Opening Day isn't going to jazz a ruthless fan base that once threw batteries at JD Drew and booed Santa Claus.

On the left side of the infield, some dudes named Cody Asche and Freddy Galvis got to see their name in lights.

Starting CF Odubel Herrera was a Rule 5 draft pick in December, and it tells you a lot if the Rangers didn't want him.

GM Ruben Amaro Jr might not last until Memorial Day by the looks of this motley crew he's assembled. His stubbornness is starting to cloud his judgment if he thinks there's a gullible buffoon who's even more inept than he is and would take on the contracts of Ryan Howard or Cliff Lee.

Blow it up, Ruben! But please give Manager Ryne Sandberg the benefit of the doubt. Here's a man who came back to the organization that spurned him over 30 years ago in one of the worst trades in baseball history.