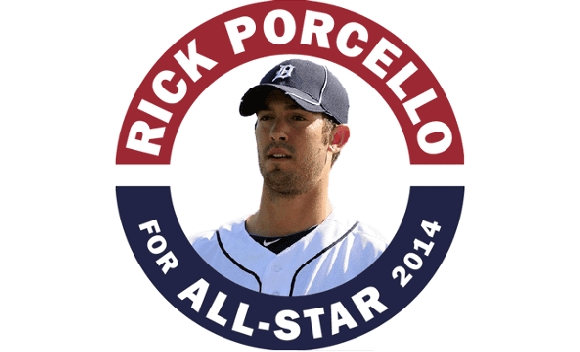 The 2014 All-Star break is upon us, which allows time for reflection and seeking the inner peace that most Americans strive for on a daily basis.

For Major League Baseball players, it’s a time to either travel to Minneapolis or plan a golfing trip with the boys.

All the finest players in the land will gather at Target Field tomorrow night after being bestowed the honor of playing in the Mid-Summer Classic.

For the All-Snark players listed below, however, they won't be allowed anywhere near Target Field ... or the entire state of Minnesota, for that matter.

What a completely forgettable first half it’s been for these players, with an astounding four AL hitters who have already struck out 100 times or more, and Chris Carter has 99. We’ll talk about Carter later and won’t need to Google Hall of Fame for any additional information.

Things have become so bad on the South Side that he recently began wearing glasses in hopes of seeing the ball better. Yeah, right. Let's go with seeing the ball, period! What better way than to take a page out of Major League when Ricky Vaughn did the same exact thing.

Flowers is a member of the Over 100 K’s at the All-Star break club -- along with teammate Adam Dunn -- but honestly, who’s surprised by that? Flowers nearly has twice as many strikeouts (102) than hits (56). If the glasses don’t help, perhaps sacrificing a live chicken, offering Jobu cigar and rum, or wearing a garter belt will help. It sure can’t hurt.

What a difference a year makes! Last year, Davis was the talk of baseball posting a career year with 53 home runs and 138 RBI’s. Flash forward to 2014, and Davis finds himself notched right below the Mendoza Line at .199 and joins Flowers in the Over 100 K’s at the All-Star break club. If he can turn it around in the second half, Baltimore could truly be a force to be reckoned with. Manny Machado keeping his cool would help too. Just saying.

Now do you see why the White Sox are in the basement in the AL Central? Beckham is one of those prospects who’s been around for several seasons, just waiting to break out. At this point, an acne breakout would show more signs of life than what he’s shown on the field. Did the White Sox think he’s related to David Beckham and has immeasurable athletic talent? What did that scout see, exactly?

You forgot the Astros play in the AL West, didn’t you? It’s only their second season since being strong-armed by Bud Selig. Nonetheless, the Astros actually find themselves in fourth place at the All-Star break, following an epic collapse by the Texas Rangers. Still, they’re a long ways from the glory days of the Killer B’s and kinda tie-dyed uniforms.

This guy is really lucky to not be playing for the Tacoma Rainiers. Sports talk radio in Seattle has been lighting this guy up like Clark Griswold’s house. He's managed to get his batting average above .200 -- .204 to be exact -- however, his .273 OBP is the worst among all qualified AL position players. Worse, I’ve seen him make more bone-headed plays in the field this season than any player I can remember in recent memory. Miller was even tossed out of the game Saturday night by home plate umpire Bob Davidson in one of the strangest ejections I've seen in a while. Yep, it’s been that kind of year for Brad.

Ackley epitomizes the frustration of Mariners fans over the last two, three, four ... OK, 13 years since they last made the post-season. Now, if the 2014 campaign ended today, Seattle would have the final Wild Card in the American League, and that’s with trotting out guys like Miller and Ackley, who has the third worst OBP among regular, everyday players. The Little League-style throw he made in Sunday's loss to Oakland didn’t help his cause. Rumor has it the Mariners are talking to the Phillies about acquiring Marlon Byrd. Are they finally pulling the plug on the guy drafted No 2 overall in 2009? One more loss in 2008, and Seattle could’ve had Stephen Strasburg. Ackley doesn’t hit for power, steal bases, or play great defense. This is the case for tanking games to get a better draft pick, and there's no argument to be made against this practice.

High hopes were in store for Beantown after winning the World Series last year, and Bradley was supposed to be one of the young players ushering in a new era of Red Sox greats as some of the older players begin winding down their careers. Well, it’s no wonder the Bosox are in last place in the AL East, thanks to their own underachievement and a recent surge that propelled Tampa Bay out of the cellar. It’s easy to get championship hangover, or perhaps karma is catching up with the annoying Red Sox nation. I’m fine with either!

Our third player from the Chisox and none of them are named Adam Dunn. Viciedo would at least be the leading hitter on this team with a .241 BA. Viciedo might also be the leading vote getter on the All-Snark team, but Chris Davis has the name recognition. It’s sort of like finishing in second place. Being the first loser is not really a consolation prize especially on this team.

Carter is not one to shy away from swinging and missing and occasionally hitting a 450-foot-plus home run.

He'd definitely be the cleanup hitter in this lineup with 19 bombs and 40 RBIs. What's more, he just misses on joining that exclusive Over 100 K’s at the All-Star break club with 99. Well, there’s always Friday’s game at the White Sox to get over the hump. Astros at White Sox to start the second half? There’s a marquée matchup!

Correia gets the nod to start for the host city Twins, and what an awesome résumé he has put together! Correia leads the AL in losses (11) and has allowed 129 hits in 109 IP. Why don’t you just set it on a tee for them, dude; you might produce better results. Correia has the fourth-worst ERA among AL starters, just ahead of Justin Verlander. Interesting.

Nathan was supposed to be that shutdown closer the Tigers have sorely been lacking for a couple years and probably only has a job because of his contract. Besides, what else are the Tigers going to do, bring back Jose Valverde to blow more post season saves? The Tigers lack of commitment to Joaquin Benoit was just aggravating last year, and then they let him sign a free-agent deal with the Padres, where he's flourished in Petco Park with a 1.86 ERA. Nathan’s ERA: 5.61. What would really be hysterical is if the Tigers trade for Benoit for bullpen help, which is really the crux of this team. The Padres will be sellers and the 31 July trade deadline isn’t that far away.

Well, if you’re still reading after scanning through that disaster of a team, check back later, when we'll reveal the National League All-Snark team. I can only take watching about 20 minutes of batting practice ... errr ... the Home Run Derby, before the ADD sets in.