Here's the Real Culprit in the Cardinals' Hacking Scandal 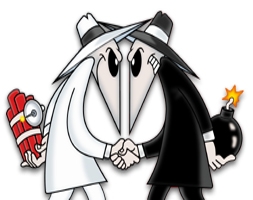 The other half -- the old boys -- saw a defensively deficient slugger who could only hit mistakes. And they weren't alone. The prospect from Texas State was still on the board in the eighth round.

In the midst of what would be an amazing draft haul for St Louis, what had become a perpetual power struggle was in full force. One of the dirty little secrets of the vaunted Cardinal Way was that the club's front office was bitterly divided between the Old School and the Sabremetricians. And GM John Mozeliak was fine with it.

Needless to say, then-Scouting Director Jeff Luhnow had advanced stats that screamed at him to select Goldschmidt by the time Round 7 appeared. But it wasn't his call. In an uneasy alternation of decisions, it was Old School's turn to choose. So, after picks like Robert Stock, Scott Bittle, and Virgil Hill, they went with outfielder Kyle Conley from the University of Washington.

Picking ahead of the Cardinals, the Arizona Diamondbacks rolled dice on Goldschmidt in Round 8, the 249th player chosen.

To be sure, players destined for greatness fall through the cracks all the time. Albert Pujols (Round 13) comes to mind. But Goldschmidt was the player who fit Luhnow's data package, and as the slugger shot to The Show, Luhnow's crowd wouldn't let the Old School faction forget it.

So there was no love lost when Luhnow went to Houston and took a key lieutenant, Sig Mejdal, with him.

The question remained, though: Luhnow's data format clearly nailed Goldschmidt's capabilities. Did he take that proprietary data-crunching system he created for the Cardinals to the 'Stros with him? And if so, how much of it was really proprietary?

Seems like a couple of low-level, self-perceived hotshots on the St Louis payroll wanted to find out. And in February 2014, they did.

How they did it and the ramifications of their chosen method are now issues for outside parties to decide.