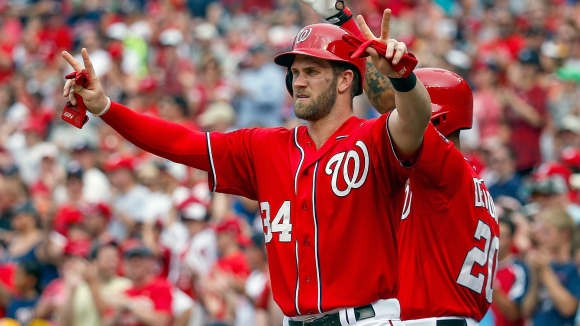 The MLB All-Star Game acts as a nifty little break roughly midway through the long season.

OK, technically, the exact midway point of the season usually passes before the Midsummer Classic.

But when your season is 162 games long, it’s always a relief to get the long half of the season outta the way.

Plus, the shorter second half makes for a fun push for the post-season.

Especially this year, where the reigning champion Chicago Cubs have been mediocre and need to vastly improve in order to defend their title come October.

But enough about the regular season. This week's all about the All-Stars.

While the majority of players are either chilling on tropical beaches or finding time to spend with the wife and kids, these chosen few are gathered in Miami to represent baseball’s best.

Not surprisingly, Washington Nationals outfielder Bryce Harper is becoming a fixture at these events.

Still only 24, this year’s appearance marks his fifth All-Star nod in his sixth season.

As a player on a team with World Series aspirations, Harper's happy to see the All-Star Game returned to a simple exhibition event, as opposed to the previous system where the winning league saw its team earn home field advantage in the World Series.

And who can blame him?

The All-Star Game is supposed to be about having fun. Not about deciding something that affects the outcome of the World Series.

Harper wants to see the game build on its exhibition status by adding in a player draft.

He's suggesting that instead of a traditional NL dudes vs AL dudes format, the top vote getters should be captains who get to draft their rosters.

Didn't he see how poorly that worked out for the NFL and NHL?

For this year’s All-Star game, those two dudes would be Harper and Yankees budding star outfielder Aaron Judge. Not a bad group of captains to build around.

This idea is par for the course for Harper, the leader of the Make Baseball Fun Again coalition. And to his credit this idea would make the All-Star game more entertaining. To quote Harper himself, an outfield of Harper, Mike Trout, and Mookie Betts would be pretty cool to see.