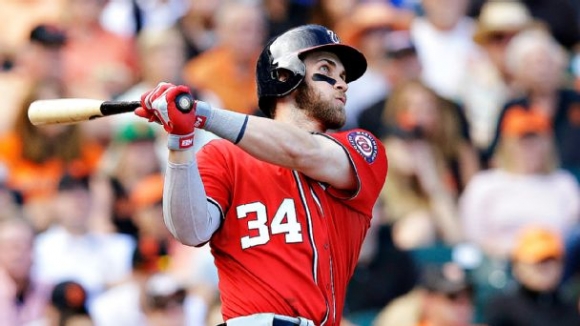 Besides Mike Trout, there are fewer players better in baseball than Bryce Harper.

How good is Harper?

Not bad for someone who's only 22.

Harper's only been in the majors for five years, but he's already complied an impressive professional résumé that includes:

In other words, stuff about which most players can only dream.

Even in a down year, dude still complied:

Despite this, the big talk surrounding Harper over the course of last season was his possible free agent earnings.

Dude actually doesn’t officially become a free agent until after the 2018 season, but players and agents are looking at his anticipated contract as the gold standard already.

Speculation has his potential contract around $400million to even $500million.

While it might sound crazy for a dude to be making half a billion playing baseball, there are those who believe the contract to be a bargain.

What with cord-cutting having a possible knock-on effect for athlete's salaries, that attitude may change. But it hasn't yet.

Throughout baseball’s winter meetings this week, talk about Harper’s impending free agency has once again arisen.

Reportedly, he's asked the Nationals for a contract of 10-plus years worth over $400mil.

The same report states that the Nationals are none too happy about these demands. That's led to speculation that the club is ready to live in a post-Bryce Harper world.

Currently, baseball's largest contract is Giancarlo Stanton’s 13 year, $325million haul with the Miami Marlins. The deal Harper is seeking would no doubt smash this record.

And yet, who wants to be known as the team that let one of the best players in the game walk away? Harper will only be 26 in 2018, so it’s not like his best years are behind him.

Plus, getting rid of Harper means you have to replace him. Could be a tall order.

No matter what happens to Harper, look for Mike Trout to come out like Ted Dibiase in 2020.